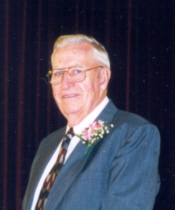 Orval C. Wagoner, 83, of 11777 Lincolnway East, Plymouth, died in the Ironwood Health and Rehabilitation Center, South Bend, at 6:20 a.m. on Sunday morning, October 12, 2003.
Orval, a Plymouth resident since 1926, was born on April 13, 1920, in Irricana Alberta, Canada, to Irvin David and Elsie May Milburn Wagoner. He was first married to Virginia L. Pelkey, in Plymouth, on April 11, 1941. Virginia died on March 3, 1997. Orval and Edna Mae Keyser Keltz were married in Plymouth on November 29, 1999.
Orval served in the U.S. Army with the 31st Infantry Division in New Guinea; Philippine Islands repairing radiators on Army tanks during W.W.II. He worked at McCords in Plymouth before the war, and after he was discharged from the Army in 1946, Orval founded Plymouth Radiator Repair, moving to the present location in 1950. Orval retired in 1985, when his daughter and son-in-law, Linda and Dennis Filson took over the business.
Orval loved to talk about his Army experiences. When he was younger, he enjoyed playing baseball, and was an avid bowler. For 20 years, he spent the winters in Florida. He was a member of the Tucker Automobile Association.
Orval is survived by Edna Mae and by his daughter and son-in-law, Linda K. and Dennis Filson of Plymouth. Five grandchildren also survive. They are: granddaughters Julie Graves of Orlando, Fla.; Tara and Brad Thornton of Bremen, Ind., and Lana and Josh McCoy of Etna Green, Ind. His grandsons are Matthew Graves of Seattle, Wash., and Shawn and Kelly Filson of Plymouth.
Orval was preceded in death by his parents, his first wife, Virginia, and a daughter, Vickie Sue Graves who died on May 31, 1973. Three brothers, Galen, Wilbur and Ernest and a sister, Dorothy Rottmiller, have also died.
Friends will be welcomed by the family at the Johnson-Danielson Funeral Home, 1100 N. Michigan St., Plymouth, on Wednesday, Oct. 15, 2003, from 3 to 7 p.m. Funeral services for Orval will be held in the funeral home at 10:00 a.m. on Thursday, Oct. 16, 2003, with Pastor Lyle A. Breeding of the Plymouth Wesleyan Church, of which Orval was a member, officiating.
Interment will be in New Oakhill Cemetery, Plymouth, where Military Honor’s will be provided by Plymouth V.F.W. Post 1162. Memorial gifts may be made to the Behavior Medicine Unit of St. Anthony’s Hospital, Michigan City, Ind.