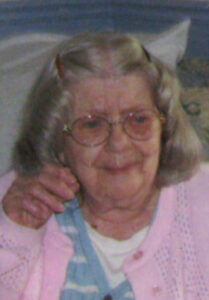 P. Josephine Towns, 90, died on Sunday March 14, 2010 in Miller’s Merry Manor Nursing Home.
Josephine was born on May 6, 1919 in Plymouth, the daughter of Cliva Joe & Caroline Lolmaugh Eaglebarger. A Marshall County resident most of her life Josephine graduated from Argos High School with the class of 1937. After high school she attended the International Secretarial College in Ft. Wayne and graduated in 1938.
On September 14, 1943 in Phoenix, AZ Josephine took Herschel E. Towns as her husband; he preceded her in death on December 16, 1990.
Most of Josephine’s time was spent as a homemaker; however she did work for Farm Security Administration in both LaPorte and Plymouth from 1938 to 1943 when she resigned just prior to marriage. She also was a member of the Civil Air Patrol from 1943 to 1955.
Josephine became a member of the Kappa Kappa Kappa in 1961, she is a past treasure. She became inactive in 1976 allowing more time for her beloved daughter Toby.
She is survived by her daughter Toby Ann Towns of Warsaw, four nieces Becky (Jack) Cunningham, Taft, CA; Dede (Don) Sherman, Hunnington, IN; Jodie (Ed) Welz, Mulberry, FL; and Mary (Stanley) Wilhelm, Argos, IN; three nephews Jon Branch Williams Bakersfield, CA; Robert O. (Dorothy) Town, Bluffton, OH; William G. (Lu) Town, Bremen, IN; a one sister-in-law Dortha Williams of Ft. Wayne survives as well.
Josephine was preceded in death by her husband, parents, a sister Martha Jane Williams, and a brother-in-law Bill Williams.
Friends are invited to celebrate with Josephine’s family on Wednesday March 17, 2010 from 10 a.m. to 12 p.m. in the Johnson-Danielson Funeral Home, 1100 N. Michigan Street, Plymouth, IN 46563. A funeral service will be held immediately following at 12 p.m. The Rev. Chuck Krieg will officiate.
Entombment will follow in the New Oakhill Cemetery Mausoleum, Plymouth.
Memorial contributions in Josephine’s name may be given the the charity of the donor’s choice.