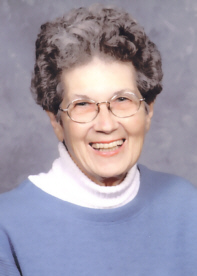 Patricia A. “Pat” Renz, a resident of Plymouth since 1953, coming from Chicago, died unexpectedly of natural causes in her home, 800 S. Michigan St., Plymouth, at 10:14 a.m. on Sunday, Oct. 7, 2007. She was 81-years-old.
Born in Erie, Pa., on January 21, 1926, Pat was the daughter of Jesse B. and Winifred Brandt Howe. She graduated in 1943 from Strong Vincent High School in Erie. She then received her certification as a Medical Technologist from what is now Case Western Reserve University in Cleveland, Ohio.
On July 3, 1948, in Erie, Pat and James T. Renz were married. Jim died ten years ago on Jan. 31, 1997.
Pat first served as a Medical Technologist for Erie’s St. Vincent Hospital, also Goshen General and completed her career at Parkview/Saint Joseph Hospital in Plymouth. She retired in 1988, but continued to volunteer at various health screening events in the community.
A homemaker for her family, she enjoyed crocheting and knitting. A smile for everyone, she loved to cook and garden.
An avid follower of Plymouth athletics, she attended all of the games, especially enjoying those of her children and grandchildren. For years she occupied the front row for nearly every home basketball game.
A member of St. Michael Roman Catholic Church, her pleasant demeanor served her well as a “greeter” before Mass. She was a former active member of the Tri Kappa Sorority and was presently an Associate member. She and her husband volunteered as Republican precinct workers for many years.
Pat is survived by her two daughters, two sons, 12 grandchildren and one great-grandchild. They are Sharon L. (Jack) Samar of Woodbridge, Va., and children: Jaime (Steve) Gramatikos, Jack Joseph “J.J.” Samar III, and Lt. Jordan (Lt. Kevin) McCormick and great-granddaughter, MacKenzie. Daughter: Robin L. (Scott) Stamm of Warsaw, and their children, Megan, Matthew and Kyle Stamm. Son: Gregory A. (Mercy) Renz of Plymouth, and their children, Andrew, Jason, Jeremy and Lindsay Renz and son: Bryan H. Renz also of Plymouth and his children, Ericka and Ashley Renz.
A son, James D. Renz, preceded his mother in death on May 7, 2005. Pat’s parents, spouse and a sister, Marjorie Kolar, have also died.
Friends are invited to celebrate the life and share memories of Pat Renz with her family on Thursday, Oct. 11, 2007, from 4 to 8 p.m. in the Johnson-Danielson Funeral Home, 1100 N. Michigan St., Plymouth. A Rosary will be prayed at 8 p.m.
A Mass of Christian Burial will be held for Pat on Friday, Oct. 12, 2007 at 10 a.m. in St. Michael’s Roman Catholic Church, 613, N. Center St. Plymouth. The Rev. Father William Kummer, pastor of the church will officiate.
Interment will follow in New Oakhill Cemetery, Plymouth.
In lieu of flowers, memorial gifts in Pat’s memory are requested for the Plymouth Athletic Department, #1 Big Red Drive, Plymouth, IN 46563 or the St. Michael’s Parish Parking/Playground Development Fund. 612 N. Walnut St., Plymouth, IN 46563