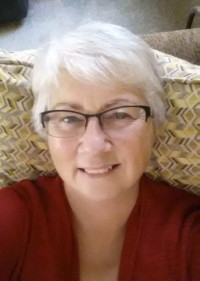 Patricia D. Bailey, 61, passed away from a brief illness on Sunday, November 10, 2019 with family by her bedside.
Born in Columbus, Ohio on February 13, 1958, Patty was the daughter of Harold â€œBudâ€ Gill and Marie (Bailey) McCollough. A much loved man, Bud would pass away when she was ten, and her mother would later marry Robert McCollough who became her second father. She graduated from Lakewood High School in Hebron, Ohio. She would attend Indiana Wesleyan University and attain her associateâ€™s degree later in life after moving to Plymouth.
Patty proudly served for our country in the U.S. Army until her Honorable Discharge in 1979.
She married Daniel Carbaugh on January 29, 1977 and have two boys, Joshua and Thomas. They would separate but remain good friends.
Patty married Michael E. Wolford, whom she had known for 25 years, on May 22, 2014 in Plymouth. They had met through her working as a trainer for Sprint.
She most recently worked for St. Joseph Regional Medical Center in Plymouth and Mishawaka and Beacon Medical group, as a trainer in the medical records department. She would retire in the fall of 2018 and work part-time from home.
After the children had grown and were off on their own, Patty and Mike were avid motorcycle travelers. They loved being with nature, and enjoyed hiking. They were very fond of Yosemite National Park. She was a former member of the Frank Lloyd Wright Preservation, and enjoyed travelling to see his architectural designs. Patty adored her family and loved holiday gatherings. She had many great friends that meant a lot to her.
She is survived by her husband, Mike of Plymouth, and their children: Joshua D. (Saralyn) Carbaugh of Beaver Creek, OH, Thomas A. (Ann Wright) Carbaugh of Plymouth, Gary M. (Jennifer) Wolford of LaPaz and Jeanna L. Wolford of Ft. Wayne; grandchildren: Aerith Carbaugh, Blake Keefe, Liam Wolford and Andrea Wolford-Rooney; great-grandchildren, Finn and Riverlyn; and sisters, Yevonne Cottrill and Debora Angle of Ohio; step-father, Robert McCollough of Ohio; and many nieces, nephews and dear friends.
A Family Celebration of Life will be held at a later date.
Memorial contributions can be made to Center for Hospice Care 112 S. Center St. Plymouth IN 46563.