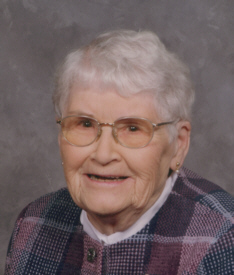 Patricia “Pat” Marie Polen Clinton, 83, passed away on Sunday, September 25, 2011, at her River Park home in Plymouth, following a six-month battle with lung cancer. She was a former Newton County resident and moved her family to Plymouth in 1974. Patricia was born December 27, 1927 to John James Polen and Cleta Marie (Goessman) Polen in Rensselaer, Ind. Due to the death of her mother soon after her birth, Patricia was raised by her paternal grandmother, Mary Egan Polen and aunt, Elizabeth Polen Hickman, in Goodland, Ind. Patricia attended school and graduated from Goodland High School in 1946.
Patricia was married to Russell Calvin Clinton in Goodland on November 19, 1947 and subsequently gave birth to five children. Her husband, Russell preceded her in death July 2, 1989. She is survived by her five children: Franki Lee Clinton Budde residing in Lafayette, IN, Stephen William (Bonnie) Clinton residing in Fishers, IN., Michael John Clinton residing in Bloomington, IN., Joseph Russell (Judy) Clinton residing in Plymouth, IN, and Patrick Thomas (Jennifer) Clinton residing in Gray Court, South Carolina. She is survived by eight grandchildren; Tracey (Rodney) Winger, Timothy Budde, Jennifer (William) Rutherford, Brian Clinton, Michael (Elly) Clinton, Ryan Clinton, Chad Clinton and Sara Clinton, six great-grandchildren also survive together with a brother, Francis Polen and a sister, Mary Polen. Patricia was preceded in death by a brother, John (Bud) Polen and a sister, Phyllis Polen Ferrell.
Patricia was employed in Kentland, Indiana and Plymouth, Indiana by United Telephone Company as a telephone operator and supervisor until her retirement in 1988. Patricia Clinton attended St. Michael Catholic Church in Plymouth.
Patricia was a loving daughter, wife, mother, grandmother and great-grandmother who supported and nurtured her family. When challenges came in her life she always fought hard to protect her family and keep them together. She enjoyed following the lives of her grandchildren and was a regular at Plymouth High School football, basketball, baseball and volleyball games. Her favorite times were the holidays when everyone would gather at her home. As she grew older, her family took on more of the holiday responsibilities, but she always enjoyed seeing everyone back together. She will be missed by all who knew and loved her.
Visiting hours will be from 4 – 7 p.m. EDT Wednesday, September 28, 2011, in the Johnson-Danielson Funeral Home, 1100 N. Michigan St., Plymouth. The Rosary will be prayed there at 7 p.m.
A Mass of Christian Burial will take place at Saints Peter & Paul Catholic Church, 419 S. Newton St, Goodland, Indiana on Thursday at Noon where calling will continue from 10:45 a.m. until 11:45 a.m. CDT The Rev. Fr. Robert Bernotas will celebrate the Mass.
It was Patricia’s wish that she be interred near her mother’s grave in the Mt. Calvary Cemetery in Goodland, IN.
Preferred memorial gifts in Patricia’s name may be made to the Center for Hospice Care, 112 S. Center St., Plymouth, IN 46563.