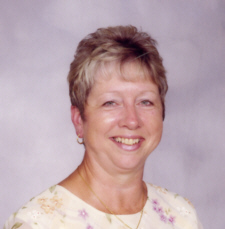 Patricia Maenhout, 9738 1st Road, Bremen, IN., died of natural causes on Thursday, October 9, 2008, in the Bremen Community Hospital. She was 57-years-old.
Patricia was born the daughter of Harold I. and Maxine Worsham Hamilton in Bremen on December 18, 1950.
She graduated from LaVille High School with the class of 1969.
On July 21, 1973, in Plymouth, Patricia and Russell Maenhout were married.
For 16 years she was a teacher’s aide at LaVille schools and had also worked as a telephone operator.
Adept with her hands, she enjoyed knitting, sewing and cross-stitching. She loved to travel. Raising her family was a great joy and satisfaction and she enjoyed her grandchildren and their activities.
Patricia was a member of the Calvary Lutheran Women’s Club. She was a Red Hat Club member, a Sunday school teacher and a member of the school board.
She is survived by her husband, a daughter and two sons. They are Ryan E. (Jessica) Maenhout and their children, Allyson and Ryan Nicholas of Bremen: Angela L. (Emanuel) Reese, South Bend, and their children Karrissa and Jaisyn Reese and Kevin (Amy) Maenhout, Bremen.
Two brothers, Harold (Delores) Gene Hamilton, Plymouth and Charles Hamilton, Bremen, and several nieces and nephews also survive.
Patricia was preceded in death by her parents.
Friends are invited to share memories of Patricia with her family from 3 to 7 p.m. on Saturday, October 11, 2008, and for one hour prior to funeral services on Sunday, October 12, 2008, at 2 p.m. in the Calvary Lutheran Church, 1314 N. Michigan St., Plymouth.
The Rev. Steven Resner, pastor of the Calvary Lutheran Church, will officiate.
Interment will be in New Oakhill Cemetery, Plymouth.
Memorial gifts in Patricia’s memory may be made to her church.