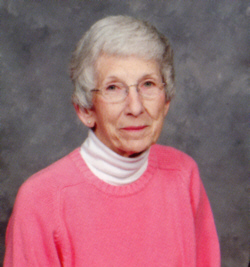 Patricia Monehen, 83, died at 5:05 p.m. Thursday, June 26, 2008, in Miller’s Merry Manor, Plymouth.
The daughter of Ed W. and Ada A. Stayton South, Pat was born on March 25, 1925, in Rochester. A lifetime area resident, she grew up in Argos, and was a 1943 graduate of Argos High School.
Pat and James R. Monehen were married in St. Michael Catholic Church on February 9, 1946. Jim preceded her in death on October 23, 1994.
Working with collections and insurance, Pat had worked for area Dentists: Dr. William Middleton of Argos, Dr. Greg Winteregg of Plymouth, and retired in 1997 from the office of Dr. William Record of Plymouth.
She was a member of St. Michael Catholic Church, the Altar Rosary Society of the church, and The Daughter’s of the American Revolution. She loved to read, go shopping at clothing stores and when she was able, work in her flower garden.
Pat is survived by two daughters: Teresa (Dick) Johnson of Plymouth and Rosemary Monehen of Upland, California, and three grandchildren and their families. The grandchildren are: Jason Yoder and daughter Ashley, Chad Yoder and children Michael and Kali and Ryan Yoder, all of Plymouth.
She was preceded in death by her parents and a brother, Donald South.
Friends are invited to celebrate Pat’s life on Sunday, June 29, 2008 from 4 to 8 p.m. and after 7:00 a.m. on Monday June 30, 2008. A Rosary will be held at 7:30 p.m. Sunday in the Funeral Home.
A Mass of Christian Burial will be held in St. Michael Catholic Church at 11:00 a.m. on Monday, June 30, 2008, officiated by Fr. William Kummer.
Burial will be in New Oakhill Cemetery, Plymouth.
Memorial gifts in Pat’s name may be given to St. Michael Catholic Church or The Center for Hospice and Palliative Care.