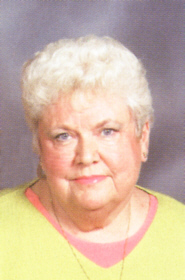 Patricia “Patty” Stutzman, 75, died of natural causes following an extended illness at 11:16 p.m. Sunday, August 27, 2006 in the Pilgrim Manor Care Center.
Patty was born in Mentone, Indiana on October 12, 1930, the daughter of Arthur James and Lillian (Hatfield) Witham. She graduated from Mentone High School.
On November 10, 1947 in the Plymouth First United Church of Christ, Patty became the bride of Howard “Smokie” Stutzman. From that day they did everything together. They raised three children, served as longtime managers of the Plymouth Country Club, they owned and operated a Kentucky Fried Chicken franchise in Texas from 1966 – 1977 and Patty’s Party Pack in Plymouth from 1985 – 1993. Patty enjoyed entertaining and time spent with family and friends. Her artistic talents were expressed in her paintings and the decorating of her home. She was a proud member of the Red Hat Society, the Plymouth Country Club and was faithful to the First United Church of Christ.
Surviving is her spouse of nearly 59 years, a daughter Rexalea Warren of Plymouth, a son Samuel Witham Stutzman of Bourbon, along with five grandchildren; Christopher “Scooter” Warren and Jennifer Warren both of Plymouth, Schuyler (Julie) Stutzman of Ft. Wayne, Lindsay Stutzman and Savannah Stutzman both of Bourbon.
Three sisters and a brother also survive. They are; Betty (Rex) Zimpleman of Mentone, Beverly Johnston of Warsaw, Sandra (Alan) Rovenstine of Atwood and Rex (Freda) Witham of Mentone. Numerous nieces and nephews also survive.
She was preceded in death by her parents, a son Bill and brothers Ned and Dean “Curly” Witham.
The family will receive friends on Wednesday, August 30th from 4 – 8 p.m. in the Johnson-Danielson Funeral Home, 1100 N. Michigan St. Plymouth and again on Thursday from 1 – 2 p.m. in the First United Church of Christ, 321 N. Center St. Plymouth where services will be held at 2 p.m. with Pastor Steve Voelker and Rev. Dr. Ronald Liechty officiating.
Burial will take place at the New Oakhill Cemetery and Memorial Gifts may be given in Patty’s name to the Center for Hospice and Palliative Care, 112 S. Center St. Plymouth, IN 46563.