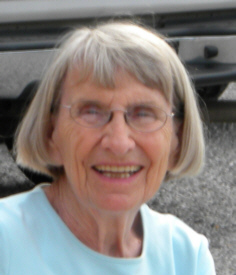 Patricia R. (Penick) Mellin, 84, passed away peacefully on Monday, June 18th at Elkhart General Hospital. Pat was born on June 11, 1928 in Ashley, Indiana to Edwin and Dorothy (Robinett) Penick. When Pat was young, her family moved to Walkerton, Indiana, directly across the street from Pat’s classmate and future husband, Dave Mellin. Soon after they were graduated from Walkerton High School in 1946, Pat and Dave chose separate paths—Pat to study education at Indiana University, and Dave to serve in the military—but both soon returned to their hometown, and to one another. They were married on Thanksgiving Day, November 24, 1949. Pat, who completed her BA in Education at Bethel College, taught at Walkerton Elementary School. Pat and Dave moved to Plymouth, Indiana in 1968, where both continued with their teaching and business careers. Pat loved being a mother, grandmother, and great-grandmother. She is survived by her four children: son D. Thomas (Shari) Mellin of Elkhart, IN, grandson Matthew (Jeanne) Mellin of Levallois-Perret, France, and great-granddaughter Juliet Mellin; son Lawrence (Debbie) Mellin of Plymouth, IN and grandson Erik Mellin of LaPorte, IN; son Robert (Maureen Roeger) Mellin of Valparaiso, IN and granddaughters Eleanor and Emily; daughter Susan (Mark) Coney of South Bend, IN. Pat also loved her new step-family: grandsons Michael Coney of Lugoff, SC and Jeffrey (Nikki) Coney of White Pigeon, MI; great-grandchildren Dylan, Tyler, and Kaylyn Coney. In addition, Pat’s nieces and nephews looked up to her as a family matriarch, since their Aunt Pat was the last of her generation from both sides of the family.
Pat was preceded in death by her parents Edwin and Dorothy Penick, her sisters Kathleen (Kay) Walz Webb and Sarah (Sally) Wilcox, and her husband of fifty-seven years, David Martin Mellin.
Pat loved to read and was a member of several book clubs, enjoyed thoughtful conversations with her family and friends, and devoted herself to her beliefs, maintaining an active membership initially in the United Methodist Church of Walkerton and, for the last forty-four years of her life, in the First United Methodist Church of Plymouth. She also gave herself to many causes in her community. Pat enjoyed participating in social organizations such as Eastern Star (past matron), Tri-Kappa, and bridge club, but she also enjoyed moments of solitude: she loved to sit on her deck, reading novels and listening to birds, and she found joy in her daily walks in the neighborhood. Travel was also an important part of Pat’s life; she traveled throughout the United States and parts of Canada and Europe, enjoyed several cruises, and spent parts of many winters in Florida, but perhaps the highlight of her travels may have been her trip to France in 2005, where she attended the wedding of her grandson Matt and visited Paris, the D-Day beaches in Normandy, and Monet’s gardens in Giverny. Pat Mellin will be remembered as an intellectually curious, deeply compassionate, quietly selfless wife, mother, teacher, and friend who lived a just, dignified life. While she will be missed, her being will endure with those who had the privilege of Pat’s kind friendship.
The family will receive visitors on Thursday, June 21st from 4 – 7 p.m. in the Johnson-Danielson Funeral Home, 1100 N. Michigan St., Plymouth where an Eastern Star Memorial Service will be held at 7 p.m.
A celebration of Pat’s remarkable life, officiated by Rev. Larry Marhanka, will be held on Friday, June 22 at 11 a.m. in the First United Methodist Church, 400 North Michigan Street in Plymouth, IN. with visitation one hour prior to the service in the church. In lieu of flowers, the family requests that you perform random acts of kindness in Pat’s memory. Those who wish to make a donation may do so to the First United Methodist Church, Plymouth.