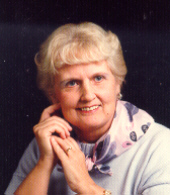 Patricia “Pat” (Jung) Cook, 1011 N. Center Street, Plymouth, died in Saint Joseph Regional Medical Center, Plymouth, following an extended illness, at 8:15 a.m., on Saturday, July 24, 2004. She was 69 years old and had lived most of her life in Marshall County.
Pat was born in Grand Rapids, Michigan, on February 1, 1935. She was the daughter of H.E.G. and M. Grace Hutchinson Clarke.
She attended Argos schools with the class of 1953.
In Argos, she was married to Thomas S. Jung on September 20, 1952. Thomas died on March 10, 1974. On January 28, 1984, Pat and Charles F. Cook were married in Plymouth. Charles died on July 4, 1989.
A homemaker and mother foremost, she had worked for a time as a nurse’s aide for Parkview Hospital. She was a legal secretary for her brother, R. Alexis Clarke and later a Homemaker for the Marshall County Welfare Dept., teaching clients how to set up a household. Most recently she served as a cook for the Marshall County Sheriff’s Department.
Her family and her grandchildren were her most beloved interests. She loved all children and was a mom and grandma to many outside her family and was a foster parent of two.
She loved music and especially enjoyed playing the piano. With an appreciation for art, she sketched and drew pictures and has a vast collection of Snow White & the Seven Dwarfs figurines.
Pat attended the Plymouth First United Methodist Church, was a Campfire Leader and in her young adult life had been a former Rainbow Girl. She was a member of the Business and Professional Women’s Club, the Twins Club, the PTA and the Women of the Moose, Lodge 1355. She was also involved in the development of the original ‘City Directory.’
Her children are: Laura J. and Bob Lappin, Plymouth; Kathy A. and Don Parker, Plymouth, Teresa S. and Terry Long, Argos, Ind., Thomas S. and Mary Jo Jung II, Burleson, Texas, Stephen C. and Deb Jung, Plymouth, Candy C. and Brent Wainscott, Warsaw.
Two step-sons; Todd Cook, Plymouth and Thad Cook of Fla.
Thirteen grandchildren, five great-grandchildren and several step-grandchildren survive as well, together with two brothers, William C. and Rose Mary Clarke, Indianapolis and Eric G. and Esther Clarke, San Pedro, Calif.
A sister-in-law, Sally Ann Clarke, Plymouth, and two brothers-in law, Kenneth and Cleone Jung, Grand Rapids, Mich., and Keith and Mary Jung, Des Moines, Iowa, also survive.
Pat was preceded in death by her parents, spouses and a son, John Eric Jung. Also, two brothers, Jack Clarke and R. Alexis Clarke and a sister, Joyce Drubert.
Visitation with the family will be from 4 to 8 p.m. on Tuesday, July 27, 2004, in the Johnson -Danielson Funeral Home, 1100 N. Michigan St., Plymouth.
Funeral services for Pat will be held at 10:30 a.m. on Wednesday, July 28, 2004, in the funeral home. The Rev. Dr. Dean Fager, pastor of the First United Methodist Church will officiate.
Interment will be in New Oakhill Cemetery, Plymouth. Memorials may be directed to the Scleroderma Research Foundation, 12 Kent Way, Suite 101, Byfield, Mass., 01922.