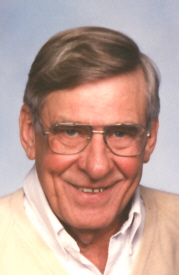 Patrick J. “Pat” Langdon, 83, a Pretty Lake resident, passed away Thursday evening of natural causes.
He was born at home in Plymouth on October 3, 1924 the son of James Henry and Edna Henrietta (Freyman) Langdon. Pat was a graduate of Plymouth High School
He and A. Elizabeth “Betty” Quillen were married June 24, 1948 in Plymouth. Patrick proudly served his country during WWII in the United States Navy. After serving he worked as a barber, a salesman, and was a previous owner of Pat’s Bar in Lapaz.
He got great pleasure out of being with his family and friends. He was a member of the VFW, Moose Lodge, a Kentucky Colonel, and a former Phi Delt fraternity member.
He is survived by his wife Betty two sons; James P. “Jim” Langdon, Knox, IN; John “JJ” Langdon, Colorado Springs, CO; a daughter Patty L. Johnson, Plymouth, IN; five grandchildren, one great grandchild, two brothers, Robert H. (Mary Alice) Langdon, Terre Haute, IN; Thomas V. (Kay) Langdon, Plymouth, IN, a sister-in-law Jean L. Langdon, Plymouth, IN; and a brother-in-law Robert “Bob” Jones, Plymouth, IN. Several nieces and nephews survive as well.
Pat was preceded in death by his parents, a brother William Langdon, and two sisters Marynell Kern and Sarah “Sally” Jones.
Family and friends will gather at the Johnson-Danielson Funeral Home, 1100 N. Michigan St., Plymouth on Monday, March 3rd from 4 – 8 p.m. A Rosary will follow at 8:15 p.m. in the funeral home.
A celebration of the Mass of Christian Burial will be held at Noon on Tuesday, March 4th in the St. Michael Catholic Church, 613 N. Center St., Plymouth with Fr. William Kummer, pastor.
Military honors will be accorded Pat following the Mass by members of the V.F.W. Post 1162 and American Legion Post 27.