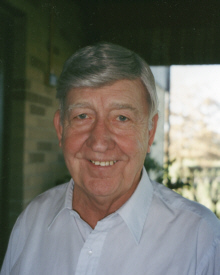 Patrick Joseph Flynn, Sr., beloved husband, father, grandfather, uncle, brother, and friend died February 27, 2006, at the age of 79 due to natural causes.
Pat was born on September 23, 1926 in Herrin, Illinois to Michael J. and Catherine M. Currie Flynn. Pat was preceded in death by his older brother, Michael, and is survived by his older sister, Mary. Pat spent his childhood and young adult life in Chicago, Illinois, where he met and married his wife, Catherine M. Cardiff, on October 27, 1951. A perpetually hard worker, Pat attended night classes in order to receive his degree in Industrial Engineering from the Illinois Institute of Technology. He was employed as an electrician during the day—and loved to remind his grandchildren that he helped wire the runways at O’Hare International Airport. In his spare time, he and his brother, Michael, formed the Duplicators, a vaudeville act that performed throughout the Midwest from 1945-1951.
Pat parlayed his understanding of electricity and construction into a fruitful career in the mobile home industry. From 1954-1956 he was employed by DeRose Industries in Bonham, Texas. He worked for Star Homes in Lenore, North Carolina from 1957-1959 and in 1960 settled in Plymouth, Indiana, where he was named General Manager of Divco-Wayne in Bourbon. He moved on to Guerdon Industries and in 1969 founded Shamrock Homes, a successful custom-made manufactured housing business. Even as Chairman Emeritus, Pat would come into work every day to check on business and to spend time with his four sons, the current owners of Shamrock Homes.
During their 55-year marriage, Pat and Kay welcomed eight children into their family: Kathleen, Michael, Patrick, Jr., Daniel, Thomas, and Mary. Two children preceded Pat in death: Patrick Joseph in 1954 and another son in 1966. The six children and their loving spouses, Christopher Fox, Barbara Brems, Laura Brems, Sarah Klein, Kelsey Chipman, and Joseph Boener, gave Pat and Kay 18 grandchildren and two great-grandchildren: Chuck, Melissa, Caitlin, and Chelsea Fox; Erin, Michael, and Kara Flynn; Lauren, Megan, Catherine, and PJ Flynn, III; Sean, Connor, Matthew, and Mary Kate Flynn; Katie, Thomas, and Daniel Flynn; and Kathy and Ellen Boener.
Known as “Big Daddy” to his children, and “Grumpy” to his grandchildren, Pat loved working hard, traveling abroad, golfing, and good beer. Most of all, he loved his family and expressed that love by spending countless hours sharing stories, playing cards, and telling jokes. Pat’s open heart was not limited to loving his family. He and Kay encouraged their children to share themselves and their gifts with others. In1993 the longstanding family tradition of generosity was realized in the forming of the Flynn Family Foundation. The Foundation supports men, women, children, and families in crisis.
Pat’s outstanding work ethic, keen sense of humor, and bottomless love for others live on in his children and grandchildren. He will be deeply missed and always celebrated.
In lieu of flowers, memorial contributions may be made to St. Michael’s Parish and School, c/o 612 N. Walnut St. Plymouth, Indiana 46563.
A Mass of Resurrection will be held at 12 pm Saturday, March 4 at St. Michael Roman Catholic Church, 615 N. Center St. Plymouth where Pat was a longtime member. Visitation will precede the Mass from 10 am-12 pm in the church.
Interment will be in St. Michael’s Cemetery, Plymouth.