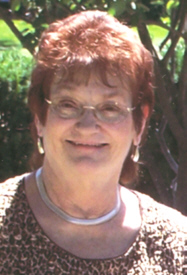 Patsy Jo (Mrs. Hal) Groninger, 69, of West St., Plymouth, passed away suddenly in St. Joseph Regional Medical Center, Plymouth on Sunday, February 3, 2013, at 10:10 AM.
Patsy, a Marshall County resident most of her life, was born in Plymouth on August 11, 1943. She was the daughter of Edgar D. and Edna Grace (Miller) Wright.
She attended Plymouth’s Lincoln High School.
She was married to her first husband, John Flynn in November of 1960, in LaPaz. John died on Christmas Day of 1970.
On New Year’s Day of 1973, Patsy and Hal Parks Groninger were married in Plymouth. Together they enjoyed life and were always a welcoming couple in their home. Hal would precede her in death on April 28, 2008.
She was a former owner of a child care service, The Play Pen, from 1983 until 1989. Patsy was a longtime member of the First Presbyterian Church in Plymouth.
Patsy is survived by a family of dearly loved step-children. They are: Douglas L. Groninger, Phoenix, AZ.: Garry Parks (Valerie) Groninger, Campbell, CA.: Larry Earl (Debra) Groninger, Colorado Springs, CO. and, Jane Ann Bechaka of Chicago, IL.
Several grand and great grandchildren also survive.
Patsy is survived by a brother Larry W. (Phyllis) Wright, two sisters; Phyllis Jean Abair of Plymouth and Hilda G. Green of Southampton, NJ. and two sisters-in-law; Eileen Wright and Darlene Wright both of Plymouth. Many loving nieces and nephews also survive.
Patsy was preceded in death by her parents, her two spouses and brothers; infant Jimmy, Roger, Eddie and William as well as sisters; Audrey Rush and Edna McCan.
Calling for family and friends will be in the Johnson-Danielson Funeral Home, 1100 N. Michigan St., Plymouth from 4 – 6 p.m. on Thursday, February 7, 2013, with funeral services following the visitation in the funeral home at 6 p.m.
Rev. Jean Sparks, pastor of the First Presbyterian Church, Plymouth, will officiate.
Interment will be in Oakhill Cemetery, Plymouth.
Memorials in Patsy’s memory may be made to the Center for Hospice Care, 112 S. Center St., Plymouth, IN 46563 or the First Presbyterian Church, 401 S. Walnut St., Plymouth, IN 46563.