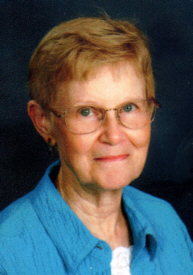 Patsy E. Kyser, 88, a lifetime Plymouth resident, died at 9:10 P.M. Thursday, February 5, 2015 at her residence under the loving care of her family and Hospice.
Patsy was born in Plymouth on June 6, 1926 to Roscoe and Leota (Watson) Nichols and was orphaned at the age of 9. She then went to live with her step brother, John Snook, of Plymouth.
On September 5, 1942, she married Bill E. Kyser in the United Brethren Parsonage in Plymouth. Bill preceded her in death on May 18, 2003. After God, Bill was the true love of her life.
Patsy’s focus was directed to being a homemaker and mother, but was also employed outside the home at various times. She worked at Meck’s during W.W. II and later worked at Merriman’s Grocery, G&G Grocery, the South Side Grocery and Addie’s Pie Shop. For many years she was a poll worker on election days.
She was a long time member of the Plymouth First United Methodist Church. She was an active member in women’s groups and committees.
She enjoyed gardening and working in her yard. She also kept close tabs on her family and was always interested in the activities of her grandchildren and great grandchildren. Patsy is survived by her son, Mike (Pat) Kyser, Bremen, Indiana, one grandson; Timothy (Kim) Kyser, Bremen, and one granddaughter; Michele (John) LaFree, Plymouth and great grandchildren, Jacob LaFree, Nathan LaFree, Emily LaFree, Hannah LaFree, Shay Kyser, Austin Walters, Shanna Walters and a great-great grand baby, Madeline Rose Ford.
Patsy was preceded in death by her parents, her husband, Bill and brother John Shook.
Visitation with the family will be from Noon to 2:00 P.M. on Tuesday, February 10, 2015, in the Johnson-Danielson Funeral Home, 1100 N. Michigan St. Plymouth, Indiana.
Funeral services conducted by Pastor Jeff Herron, will be held Tuesday, February 10, 2015, at 2:00 P.M. in the funeral home.
Interment will be in the New Oakhill Cemetery. Memorial contributions may be made to the Center for Hospice Care, 112 S. Center St. Plymouth IN 46563.