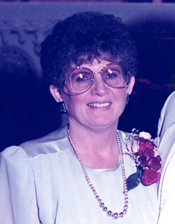 Pattie Ann Birchmeier, 81, went home to be with the Lord on September 7, 2018 at the We Belong Senior Home, with her family by her side.
She was born on November 16, 1936 in Owosso, Michigan, to Lamont E. and Virginia (Kingsbury) Sutliff. On April 27, 1957, Pattie became the wife of Richard Birchmeier, who has passed.
Pattie Ann worked for the Plymouth School System as a cook for 25 years until her retirement in 1990.
She enjoyed spending time with her family, putting together puzzles, and playing BINGO. She is survived by her five children; Greg (Betty) Birchmeier of LaPaz, Jeffery (Angie) Birchmeier of Plymouth, Cyndi (Tom) Langdon of Plymouth, Kevin Birchmeier of Plymouth, and Pamela (Mark) Mahler-Lee of Plymouth; twelve grandchildren, fourteen great-grandchildren, and two sisters; Betty English and Peggy Haase, both of Corunna, Michigan.
Along with her parents, she was preceded in death by her husband; Richard, twin sister; Wava Beckman, a daughter-in-law; Brenda Birchmeier, and a son-in-law; David Mahler.
Visitation will be from 11:00 a.m. to 1:00 p.m. on Wednesday, September 12, 2018, at Crossroads Church, 1650 North Oak Drive, Plymouth, Indiana 46563. Funeral services will begin at 1:00 p.m. with Pastor Scott Yoder officiating.
Burial will follow in the New Oak Hill Cemetery.
Memorial contributions can be made to the We Belong Senior Home, 300 Meadow Lane, Plymouth, Indiana 46563.