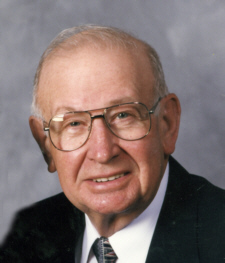 Paul E. McBride, Sr., A minister of the Church of the Brethren, passed away at 5:30 a.m. on Sunday, December 27, 2009. He was 82 years-old.
Paul was born on September 23, 1927, to George and Mary Sheneman McBride in Lakeville, Indiana. He graduated from Lakeville High School in 1945, where he was a member of the varsity basketball team.
On August 22, 1948, in the Pine Creek Church of the Brethren, Paul and Carol Karn were married. They lived in Tyner and Plymouth during their married life.
In 1963, Paul was licensed to the ministry in the Church of the Brethren and received his ordination in 1972. He served the Camp Creek, Blissville, Wakarusa and Union congregations. He also served the North Winona, Nappanee, Camp Creek and Plymouth congregations as an interim pastor.
Paul served eight years as a Volunteer Chaplin at the St. Joseph Regional Medical Center in Plymouth. He attended Manchester College, Bethany Theological Seminary and Ivy Tech, and taught at Ivy Tech (South Bend) for several years.
In 1983, after 32 years, Paul retired from Bendix as a maintenance electrician.
He enjoyed doing electrical and HVAC work where he was able to continue a personal ministry with his fellow man.
Paul is survived by Carol, his loving wife of 61 years, his daughter Linda (H.C.) Colwell of South Bend, his son, Paul Jr. ( Marcia) of South Bend, and four granddaughters: Tina (Robert) Gruber of Mishawaka, Sherry (Mark) Bickel of Goshen, Tonya Colwell at Manchester College and Melissa (Brent) Cooksey of Noblesville.
Paul is also survived by five great-grandchildren: Madeline Gruber, Ethan and Logan Bickel and Mathew and Morgan Cooksey.
Paul’s brother James (Nancy) McBride of South Bend also survives.
A grandson, Peter McBride, preceded him in death.
Friends are invited to visit with Paul’s family from 4 to 8 pm on Wednesday, December 30, 2009, at the Johnson-Danielson Funeral Home, 1100 N. Michigan St., Plymouth. Funeral services for Paul will be at 11:00 am, Thursday, December 31, 2009, in the Plymouth Church of the Brethren on the corner of Baker and Michigan Streets, next to the funeral home.
Burial will be in Oakhill Cemetery in Plymouth.
Memorial gifts in Paul’s memory may be made to the Plymouth Church of the Brethren or to a charity of one’s choice.