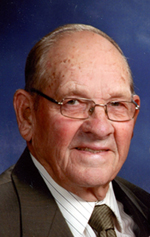 Paul J. Christiansen, 90, of Plymouth, passed away Sunday, October 1, 2017 in the St. Joseph Regional Medical Center-Plymouth Campus.
Paul was born November 15, 1926 in Bourbon, Indiana, to the late Paul P. and Anna (Hansen) Christiansen.
He attended schools in Bourbon, Etna Green, but graduated from Argos High School in 1944. He went on to serve in the United States Navy during WWII and was honorably discharged in 1946.
Paul married Maxine E. Erow on January 25, 1948 in the Calvary Evangelical Lutheran Church; she survives.
Paul had worked for forty-five years at the Plymouth McCord Radiator Factory, retiring in April of 1989. He also was a farmer after his day factory job.
He was a church usher nearly all of his church membership at the Calvary Evangelical Lutheran Church. He gave many hours to the church. He worked with the laborers for Christ Construction workers. Some of the lumber for the trim and church pews came from some of the trees in his own woods.
Surviving is his wife of sixty-nine years; Maxine E. Christiansen of Plymouth, sister; Agnes Martin of Plymouth, brothers; Tom (Sondra) Christiansen of Plymouth, John Christiansen of Granger. Also surviving are many nieces and nephews who Paul loved and enjoyed throughout his life.
He was preceded in death by his parents, three brothers; Henry, Richard, and William Christiansen, one sister-in-law; Evelyn Christiansen, nephew; James, and two nieces; Brenda and Karen.
Visitation will be from 5-7 PM Thursday, October 5, 2017 in the Johnson-Danielson Funeral Home, 1100 North Michigan Street, Plymouth, Indiana 46563, and from 10:00 AM until time of service on Friday at the church.
Funeral services will at 11:00 AM Friday, October 6, 2017 in the Calvary Evangelical Lutheran Church, 1314 North Michigan Street, Plymouth, with Pastor Eric Ahlemeyer officiating.
Burial will follow in the New Oak Hill Cemetery with Military Honors provided by members of the American Legion Post 27, Veterans of Foreign War- Marshall County Post 1162 and Disabled American Veteran Chapter 42.
Memorial contributions may be directed to Calvary Evangelical Lutheran Church.