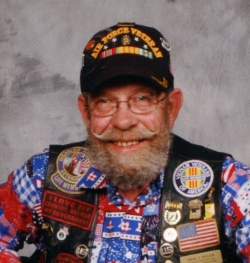 Paul LeRoy Oyler 73, of Plymouth passed away on Tuesday evening April 30, 2019 suddenly at his home. He was born in Warsaw, Indiana to Noble and Ann (Austin) Oyler on March 30, 1946.
Paul graduated with the Class of 1964 from LaVille High School and then enlisted in the U.S. Air Force and served from 1964 until 1968 serving in Viet Nam and attained the rank Sargent.
Paul married Alice Banta on June 7, 1998 at Potato Creek State Park and she survives.
Paul was a plumber-pipefitter with Local #172 and worked at Honeywell from 1972 until his retirement in 2004.
He enjoyed riding his motorcycle which was a bright red Honda tricycle. He was a member of Chapter#2 of the Rolling Thunder for many years. He served on the Union North school board from 1982 until 1990.
Paul was a member of the Disabled American Veteranâ€™s of Plymouth, Vietnam Veteranâ€™s Association of South Bend and a member of the American Huey Association of Peru, Indiana.
Survivorâ€™s include daughterâ€™s: Karen Oyler of Omaha, Nebraska, Susan Hood of Dallas Texas; step daughter: Karin Hill of Indianapolis; Grandsons: Benjamin Oyler and Austin Hood and granddaughter: Layla Hill.
He was preceded in death by his parents and brother Wallace.
Private family services will be held upon his request at the Mentone Cemetery.
Memorials may be directed to the Robert L. Miller Sr. Veteranâ€™s Center 747 S. Michigan St., South Bend, Indiana 46601, or the American Huey Museum 1697 W. Hoosier Blvd., Peru, Indiana 46970.