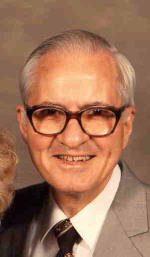 Paul S. Nicholas, 79, a Plymouth resident for the past 30 years, living on E. Jackson St., has died of natural causes, following a lengthy illness, in Pilgrim Manor Nursing Home. Paul, formerly of South Bend and Bremen, died at 12:15 a.m., Sunday, May 19, 2002. Born at home in Bremen , Ind. , on December 10, 1922 , Paul was the son of George L. and Esther Emma Habeck Nicholas. He graduated from Bremen High School with the class of 1940. He served in Europe during World War II as a Field Lineman in the U.S. Army from Jan. 1943-Dec. 1945. After the war, Paul attended Valpo Tech. In 1948, in South Bend , Paul was first married to Phyllis Margaret Wilhelm. Phyllis died on January 9, 1957. On April 4, 1964 , he and A. Pauline Horvath were married in South Bend . Pauline died on Sept. 25, 1996 . For many years, Paul was an electrician with Allied Signal in South Bend , retiring in 1985. He was an excellent and avid photographer through the years, leaving, as his legacy, thousands of slides for his family to enjoy. He was a member of St. Michael’s Roman Catholic Church and a member of the Knight of Columbus Council 1975. Paul is survived by two step-sons and two step-daughters. They are: step-sons, Michael L. and Jainie Horvath, Argos , Timothy A. and Jeanette Horvath, Plymouth , and step-daughters: Patricia A. L’Homme, Hamilton , Ontario , and Kathleen S. Rowe, Schaumburg , Ill. Fifteen grandchildren and 14 great-grandchildren also survive together with a brother, George E. Nicholas, Akins , Ark. , and two sisters, Mary Ann Nicholas Miller, New Orleans , La. , and Ruth L. Nicholas Foley and her husband, Webb, of Nashville , Tenn. Several nieces and nephews survive as well. Paul was preceded in death by his parents, his spouses and a sister, Vietta Nicholas Wood. Visitation with the family will be from 4 to 7 p.m. on Tuesday, May 21, 2002 , in the Johnson-Danielson Funeral Home, 1100 N. Michigan St. , Plymouth . A parish rosary will be said at 7 p.m. following visitation, in the funeral home. A Mass of Christian Burial will be held at 11 a.m. on Wednesday, May 22, 2002 , in St. Michael’s Roman Catholic Church, 612 N. Center St. , Plymouth ; Father Anthony Gillespie will officiate. Burial will be in the Bremen Cemetery, Bremen, Ind. Memorial gifts in Paul’s memory may be made to St. Michael’s Church.