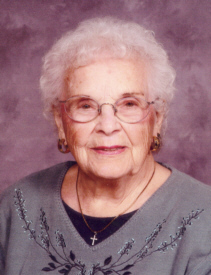 Pauline D. (Mrs. Russell) Peffley, 90, passed away Tuesday, October 4th at 10:20 p.m. in the Miller’s Merry Manor, Plymouth of natural causes.
Pauline has made Miller’s her home for the past two years and has resided in Plymouth since 1952 coming from Elkhart, Indiana. For over 20 years she and her husband spent the majority of the year in the area of Avon Park, Florida.
Born on May 10, 1921 in Mishawaka, Ind., she was the daughter of Guy and Ellen (Oatzs) Bordner. She was raised there and attended Mishawaka High School.
In June of 1938, she married Robert “Earl” Sanders and had two daughters; Mary Ann and Sally. He preceded her in death on April 12, 1948. She then married Russell E. Peffley on April 15, 1949 in Elkhart, Ind. who preceded her in death on April 7, 2003.
Pauline was a fashionable lady known for being a smart shopper. She enjoyed being a homemaker, talented at crafts and a collector of dolls.
She had been an active member of the County Line Brethren Church in Lakeville also attending the Plymouth Church of the Brethren. She was a member of the Twin Lakes Home Economics Club and a determined member of the Avon Park Chapter of TOPS – Take Off Pounds Sensibly, having been crowned a queen in her late 70’s.
She is survived by her two daughters; Mary Ann Miller and Sally L. Smith both of Plymouth. Two step-daughters; Barbara (Dwayne) Zeider and Doris (Roger) Stutsman all of Elkhart. Grandchildren include: Jeffrey Miller of Orange City, Florida, Christine Miller of Plymouth, Scott Smith of San Antonio, Texas and Michael Smith of Mishawaka. Her step-grandchildren are: Marc Zeider of Columbia, Georgia and Vickie Doke of Elkhart. Great-grandchildren include: Tim, Matt, Jeffery, Amanda, Michelle, Hailey, Tiffany, and step-great grandchildren: Josh and Amanda.
A sister, Elsie Black of Grand Rapids, Mich. and a brother, Dean Bordner of South Bend also survive with nieces and nephews.
Proceeding her in death were her spouses, two sisters; June Hoschettler and Heloise Rembusch and son-in-law; Marvin Miller.
Friends are invited to join the family in celebrating Pauline’s life on Sunday, October 9th from 1 – 2 p.m. in the Plymouth Church of the Brethren, 1130 N. Michigan St. where a memorial service will begin at 2 p.m. officiated by Pastor Ruth Yoder.
Preferred memorial gifts may be made to the church or Southern Care Hospice, 310 W. McKinley Ave., Suite 340, Mishawaka, Indiana 46545.