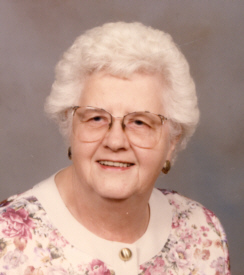 Pauline E. Burch, 93, a Marshall county resident for most of her life, passed away at 8:30 PM on Monday, January 21, 2013 at Miller’s Merry Manor, Walkerton. Pauline was born January 14, 1920 to Nathan and Laura G. (Johnson) Baker in South Bend, Indiana. She graduated from Tyner High School in 1938. On his 21st Birthday, Pauline was married to Dwight Burch on October 21, 1939 in Tyner.
Pauline was a member of the Blissville Church of The Brethren for over 70 years, and taught children’s Sunday school and Vacation Bible School.
She was a loving mother, grandma, and great grandma and was always willing to care for others including her father-in-law and two aunts she cared for many years,
She enjoyed her Polk Township Extention Home Economics Club and in her later years her Bunko group of friends.
She worked as a waitress at the Welco Truck Stop in Walkerton for 16 years. Pauline is survived by her sons, DuWayne P. (Becky) Burch of North Liberty and Dennis L. (Linda) Burch of Mentone, Indiana.
Her grandchildren, who also survive are: Todd (Karen) Burch, Walkerton, and their children, Nathan and Eric: Tracey (Tom) Duff, Walkerton, and children, Tyler and Trevor: Dawn (Shawn) Campbell, Bremen, and children, Abby and Zach: Deanna (Scott) Greene, Fort Wayne, IN and children Aaron, Isaac, Ellie and Audrey: and Deborah Burch, Fort Wayne, IN. Two great great-grandchildren Kendra and Dwight Burch survive as well.
She was preceded in death by her parents and her husband in 2008.
Visitation on Sunday, January 27, 2013 will be from 4:00 p.m. – 7:00 p.m. at Johnson-Danielson Funeral Home, 1100 N. Michigan St, Plymouth. Funeral services will be held on Monday, January 28, 2013 at 11:00 a.m. at the Blissville Church of The Brethren, 6250 Spruce Trail, Plymouth with Pastor Dester J. Cummins officiating with calling one hour prior to services in the church. Burial will be in the Tyner Cemetery.
Memorial contributions may be made to the Blissville Church of The Brethren, 6250 Spruce Trail, Plymouth, IN 46563 or to the Center for Hospice 112 Center Street, Plymouth, IN 46563