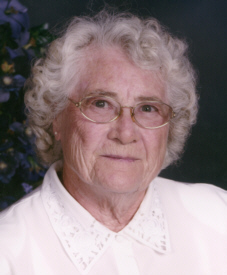 Pauline E. Wakeland, 92, passed away surrounded by her family at 4:02 a.m. on Tuesday, October 29, 2013 in St. Joseph Regional Medical Center, Plymouth.
The daughter of Roy Gilbert and Matilda A. Barbknecht Harvey, Pauline was born on July 17, 1921 in Hamlet, Indiana. She graduated from Hamlet Davis in 1939.
Pauline married Jean A. Wakeland on June 7, 1941 in Rochester, Indiana and spent nearly sixty years together. While Jean was in the military, Pauline followed him from base to base all over the states. The couple finally settled down in the 1950s after buying some land in Bremen, where they started a family and raised animals and grew crops. In their later years, the couple enjoyed traveling all over the U.S. Pauline loved bird watching and gardening. Jean would precede her in death on January 4, 2001.
From 1940-1954 Pauline worked for Meck’s Industries. She then took some time to be able to raise and spend time with her children through their growing years. When the house was empty she began to work for Bennett Brotherage in Bristol and then was a driver for Golfstream from 13 years.
Pauline is survived by their son, Michael W. and Linda Wakeland, Mishawaka, and their daughter Rhonda L. and Richard Triplet, Bremen.
Two grandsons, Dean Triplet, Bremen and Nathan Wakeland, Mishawaka, Ashley Brooke Shreve, a granddaughter, of South Bend, and a great-grandson, Kaiden Shreve, survive as well, together with her sister, Marjorie Hathaway, Ft. Wayne.
She was preceded in death by her parents, sister, Norma Rudich, and brother, George Harvey.
Visitation with the family will be from 10 to 11 a.m. on Friday, November 1, 2013 in the First United Church of Christ, 321 N. Center Street, Plymouth, where Pauline was a member for over forty years. A Memorial service will follow visitation at 11 a.m. in the church. Rev. AnnMarie Kneebone will officiate.
A private graveside service will be held in the New Oakhill Cemetery, Plymouth.
Memorial gifts may be made to the Marshall County Cancer Association, the church or the Disabled American Veterans organization.