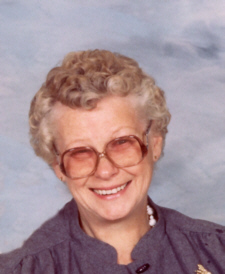 Pauline June Fish, 2092 Meadow Lane, LaPaz, died on Thursday, June 5, 2008, at 7:35 p.m. in Saint Joseph Regional Medical Center, Plymouth.
A resident of LaPaz all of her life, she was 81-years old.
Pauline was born in Bremen on January 14, 1927. She was the daughter of LeRoy Melvin and Flossie Ellen Bliley Crum. She attended LaPaz High School through the 10th grade.
On April 28, 1945, she married Harold Fish. Harold died in 1996.
As seamstress, she worked for 29 years, for T.J. Snuggles.
Pauline loved to bowl and bowled Tuesday thru Saturday. She was in the LaPaz Bowling League, was “Bowler of the Year,” and bowled “600” Back to Back.
She was a LaPaz Ladies Auxiliary member and a life time auxiliary member of the American Legion.
Pauline is survived by a daughter, Karen Vosler of Dayton, Ohio, and a son, Kevin Fish of LaPaz.
She is also survived by three granddaughters, Barbara, Kristina, and Cheryl.
She was preceded in death by her parents, her husband and a 17-year-old son, Kenny. Brothers Carl and Dale along with sisters Virginia Lemke and Eleanor who passed away as an infant.
Friends are invited to celebrate the life of Pauline June Fish with her family on Sunday, June 8, 2008 from 3 to 6 p.m. and will continue after 7:00 am on Monday June 9, 2008 at the Johnson-Danielson Funeral Home, 1100 N. Michigan St., Plymouth.
Funeral services for Pauline will be held at Monday, June 9, 2008, at 2 p.m. in the funeral home. The Rev. Stephen Cox, pastor of the Cornerstone Community Fellowship, LaPaz, Ind., will officiate.
Burial will be in Fairmont Cemetery.
Memorial gifts in Pauline’s honor may be made to the LaPaz Fire Department.