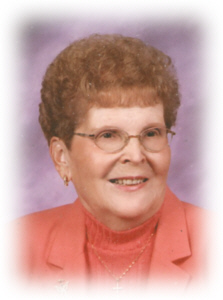 Pauline Marie Houin, 87, died Thursday July 9, 2009 in the Catherine Kasper Life Center. She was best known by her family as “Mom” and homemaker.
Pauline was born in Monterey, Indiana the daughter of Peter and Anna Hammes. She graduated from Ancilla High School in Donaldson. After her marriage to Carl Houin on September 6, 1944, they resided at the family farm located on West 13th Road. He preceded her in death on March 4, 1986 after being married for 41 years.
She was a member of St. Michael Catholic Church in Plymouth where she was involved with the Altar Rosary Society, and Harvest House. She also attended St. Mary of the Lake in Culver, and the Moose Lodge.
Pauline is survived by seven children James F. (Linda) Houin, Richard J. (Rebecca) Houin, John E. Houin, Ed M. (Linda) Houin, Tim A. (Kristel) Houin all of Plymouth, IN; Diane M. (Randy) Hawley of Bremen, IN; and Elaine K. (Terry) Downing of Jeffersonville, IN. Several grandchildren and great grandchildren survive as well.
Also surviving are one sister; Delores A. Girton of Winamac along with numerous nieces and nephews. Three sisters; Genevieve Hammes and Margaret Effinger Catherine A. Reutebuch have also preceded in death.
Family and friends will gather at the Johnson-Danielson Funeral Home, 1100 N. Michigan St., Plymouth on Sunday, July 12th from 2 – 7 p.m. A Rosary will be prayed at 6:30 p.m. in the funeral home.
A celebration of the Mass of Christian Burial will be held at 11:00 a.m. on Monday, July 13th in the St. Michael Catholic Church, 613 N. Center St., Plymouth with Fr. William Kummer and Fr. Jeffery Largent officiating.
Preferred are memorial gifts to the St. Michael Parish Playground Fund.