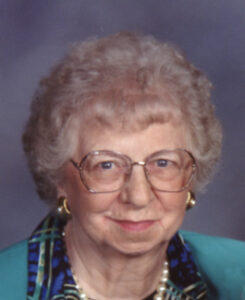 Pearl Bernice Rennells, 90, having been in failing health, passed away at her Plymouth home, at 1 a.m. on Saturday, August 3. 2013.
Born in York, N.D. on May 2, 1923, Pearl was the daughter of Elmer and Grace (Britsch) Crum.
Pearl graduated from Culver High School in 1941.
Her first job was at Wagoner Wire in Plymouth, and later several sales positions at Montgomery Ward and JC Penney until her retirement
On January 18, 1942, in Plymouth, she and Malcolm Arthur Rennells were married in the Plymouth Wesleyan Church where they continued their membership throughout their 71 years together. Malcolm died on May 22nd of this year.
She called herself “a typical farmer’s wife.” She loved to cook, she gardened flowers and vegetables and enjoyed traveling, bird watching and crocheting. Pearl is survived by a son: Ronald A. (Mary) Rennells, Plymouth, and two daughters: Janice A. (Stan) Myers of Ft. Wayne and Lori M. Rennells of Plymouth
Three grandchildren: Robert Carroll, Leisa Jaeger of Ft. Wayne and Alex Rennells of Plymouth also survive together with a great-grandson, Dylan Jaeger.
A half-sister Donna Drake, Hamlet, and two sisters-in-law, Gloria Swartz, Plymouth and Anna Marie Crum, LaPorte also survive.
Pearl was preceded in death by her parents, her spouse, brothers: “Gerald,” James, Clinton, Forrest and Baby David , a granddaughter, Michelle Cashman and sister-in-law Irene B. Maxey.
Visitation will be held on Tuesday, August 6th in the Johnson-Danielson Funeral Home, 1100 N. Michigan St., Plymouth from 5 to 7 p.m. in the evening.
Services will follow at 7 p.m. in the funeral home with Pastors Oliver Dongell and Ed Friberg officiating.
Memorial gifts may be made to The Center for Hospice Care, 112 S. Center St., Plymouth, IN., 46563, or the Plymouth Wesleyan Church, 11203 S. Michigan Road, Plymouth, IN., 46563.