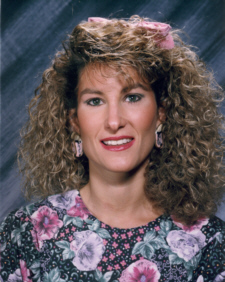 Former Washington Elementary School teacher and Plymouth native, Peggy Splix Nelson, 47, died in JFK Hospital, unexpectedly in Lake Worth, Florida on Sunday evening, November 9th 2008.
Peggy Ann Splix was born to Stanton and Teresa (Hummel) Splix on October 2, 1961 in Plymouth.
She graduated from Plymouth High School with the class of 1980. She was a former Plymouth Junior Miss and Cheerleader; she played basketball, volleyball, and ran track in high school.
Peggy graduated from Ancilla College and IUSB with a bachelor’s degree. She attended Purdue NW and graduated from Indiana State University with a Master’s Degree.
She was a former elementary teacher at Washington Elementary in Plymouth, an elementary principal at North Judson and Jeffersonville, IN. In 2000 she moved to Florida and was an elementary principal in West Palm County, Florida, up until the time of her death.
On December 8, 2001, in Florida, Peggy married Jeffery Nelson, who survives in Lake Worth, FL. Together they enjoyed life and were avid Dolphin fans having just attended the game prior to her passing.
A loving mother and grandmother, Peggy is survived by two sons; Joshua (Janna) Vancza of Indianapolis, and Eric Vancza of Orlando, Fl; and three grandchildren Tyler, Angelique, and Jonah Vancza all of Indianapolis.
Her parents also survive along with two brothers Nick (Cheryl) Splix and Michael Splix all of Plymouth. Numerous nieces, nephews, great nieces and nephews, and cousins survive as well.
She was preceded in death by her sister Sandra Splix in 1982, and her grandparents Stuart and Blanche Hummel, and Donald and Mary Splix.
Friends will be welcomed by her family to share memories and celebrate the life of Peggy from 4 to 8 p.m. on Wednesday, November 19, 2008 and after 7 a.m. on Thursday morning, November 20, 2008, at the Johnson-Danielson Funeral Home, 1100 N. Michigan St., Plymouth.
Funeral services for Peggy will be held at the Plymouth Missionary Church, 1350 E. Jefferson Street, Plymouth, at 11 a.m. on Thursday, November 20, 2008 with visitation one hour prior to services. The Rev. Pat Puglisi, pastor of the church, will officiate.
Burial will be in New Oakhill Cemetery, Plymouth.
Memorial gifts in Peggy’s memory may be made to the Peggy Nelson Memorial Scholarship Fund.