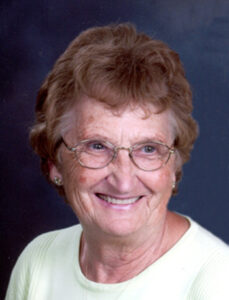 Peggy Kring, 79, of Plymouth, passed away Sunday, September 10, 2017 in the Elkhart Hospice House.
Peg was born September 23, 1937 in Plymouth to the late Stewart and Vera (Smith) Pomery.
She graduated from Argos High School in 1955.
On June 15, 1956 in Argos, Peg married Richard C. Kring. The couple shared sixty loving years together and raised two children, Steve and Teri before his passing on September 9, 2016.
She had worked at Snyderâ€™s as a bookkeeper. She was a member of the First United Methodist Church, Women of the Moose Lodge 741 and the church guild. Peg was very active in the community. She was involved with a bowling league; loved playing cards and played softball up into the age of 54 years old, playing second base. Pegâ€™s grandkids were her pride and joy. Surviving are her children; Steve A. Kring of Plymouth, Teri (Fred) Duell of Middlebury, three grandchildren; Stefani (Matt) Arthur, Danielle (George) Campbell, Brad (Kaila) Duell, five great-grandchildren; Haley, Kennadie, Leyton, Georgie and Mila. Also surviving are her three siblings; Lila Parrish of Argos, Evelyn Beam of Argos, and Jim (Shirley) Pomery of Bremen, and a sister-in-law; Phyllis Garrison of Elkhart.
Peg was preceded in death by her parents, and husband.
Visitation will be from 3-7 PM on Wednesday, September 13, 2017 in the Johnson-Danielson Funeral Home, 1100 North Michigan Street, Plymouth. The Women of the Moose will be performing a service of tribute for Peg, beginning at 7:00 PM.
Funeral services will be at 11:00 AM on Thursday, September 14, 2017 in the funeral home with Rev. Toni Carmer officiating.
A meal will be provided for the family and friends immediately following services on Thursday at the Moose Lodge 741, 1225 West Jefferson Street, Plymouth, Indiana 46563.
Private burial will be in the Oak Hill Cemetery at a later date.
In lieu of flowers, memorial contributions may be directed to either the Center for Hospice and Palliative Care, 112 South Center Street, Suite C, Plymouth, Indiana 46563 or the American Cancer Society, North Central Indiana Office, 130 Red Coach Drive, Mishawaka, Indiana 46544.