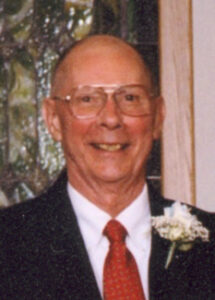 Alvin L. “Pete” Westfall, 78, died at 10:38 p.m. in St. Vincent’s Hospital, Indianapolis, IN., on Thursday, January 19, 2012.
Pete was born in Reynolds, IN., on March 25, 1933. He was the son of Errol J. and Louise (Lawyer) Westfall.
He graduated from Reynolds High School with the class of 1951 and then served in the Indiana National Guard.
On June 7, 1953, in Kokomo, IN., Pete and Phyllis Jo Davis were married. The couple has made Plymouth their home since 1968. Pete’s career in men’s retail apparel started in Rensselaer, IN at King The Clothier and then Lauer’s in Plymouth. He later became a self-employed painter.
Pete was active in the Boy Scouts and Little League baseball. He was a member of the First United Church of Christ, Plymouth where he had served on the consistory board.
He is survived by Phyllis, his wife of 58 years and by their two sons and a daughter. They are Steven L. (Sharon) Westfall, Plymouth, Larry J. (Elizabeth) Westfall, Western Springs, IL., and Diana “Kay” (Gene) Cords, Reynolds, IN.
Also surviving are seven grandchildren; Bryce Westfall, Jessica Ramberger, David Westfall, Peter Westfall, Travis Cords, Brant Cords and Tara (Chad) Dahlenburg along with three great-grandchildren; Noah, Kinley and Devyn Dahlenburg. A brother Theodore (Joyce) Westfall of Reynolds also survives.
Pete was preceded in death by his parents and a sister, Donna Snyder.
The family will receive friends on Tuesday, January 24, 2012 from 4 to 7 p.m. in the Johnson-Danielson Funeral Home, 1100 N. Michigan Street, Plymouth.
Funeral services will be held at 11 a.m. on Wednesday, January 25th in the First United Church of Christ, 321 N. Center Street, Plymouth. The family will receive guests at the church one hour prior to the service. Pastor Anna Marie Kneebone and former Pastor Robert Ahrendt will officiate.
Private interment will be held at a later date in the New Oakhill Cemetery.
Memorial gifts in Pete’s name may be given to the First United Church of Christ, 321 N. Center St. Plymouth, IN 46563 or Marshall County Habitat for Humanity, P.O. Box 524, Plymouth, IN 46563.