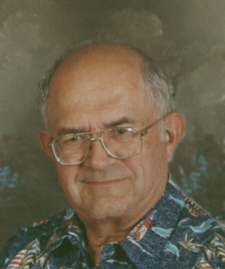 Peter James “Jim” Doll, Jr., after a courageous battle with cancer, died on Friday, November 24, 2006, at 10:07 a.m. in his home, 8138 Rose Road, in the loving care of his family.
Jim, 69, and his wife Ruth had made Plymouth their permanent home for the past 30 years. While in the Air Force he was stationed at numerous bases throughout the United States and for six years—in Japan.
He was a compassionate and selfless man whose optimism had inspired and touched many lives. He will be deeply missed and cherished forever.
Born in Plymouth on July 28, 1937, he was the son of Peter J. II and Opal E. Yeazel Doll. He graduated from Plymouth High School with the class of 1957 and from the United States Air Force Academy in 1966.
On May 23, 1959, at Travis Air Force Base in California, Jim and Ruth E. Amones, were married.
In 1976, he received his Masters Degree in Engineering Technology. He was also awarded a special citation from the Air Force for re-designing the method by which aircraft engines were rebuilt: going from one per week to the capability of five per day.
Jim retired from Grissom Air Force as a Senior Master Sergeant on July 22, 1977.
Holy Cross Parkview Hospital hired Jim as head of their Maintenance Engineering Department where he oversaw the mechanics and construction of the new hospital facility.
After 20 years of total service, he retired in January of 1997 from Saint Joseph Regional Medical Center as the Vice-President of Operations under then hospital administrator, Brian Dietz.
For many years, Jim and Ruth have divided their time with winters spent in Venice, Florida, where Jim was active with the Bible Church. This also provided seven months of combing the beaches with a metal detector and his year round sport of motorcycling on a 1200 Gold Wing.
He was a member of the Country Cruisers, a Christian based motorcycle group and was listed in the 1971 book of the Most Outstanding Men of America.
He loved Volkswagens. They were more than a hobby for Jim. He had owned and operated Doll’s Repair Service – fixing and restoring VW bugs and wagons.
He enjoyed fishing local lakes and was an avid Notre Dame fan.
He is a longtime member of the Plymouth Faith Baptist Church. Jim is survived by Ruth, his devoted wife of 47 years, their two daughters and two sons.
They are: Debra G. and Brian O’Connor and their children, Eric, Brittany and Kyle: Gerald “Scott” Doll and his children Carson and Cord and Mark J. Doll and his children, Alyssa, Justin, Dillon and Matthew, all of Plymouth: and Charlene L. and Damon Harrell and their children, Henry, Hannah and Harrison of Argos, Indiana.
Jim’s mother, Wilma L. Doll of Plymouth, a sister and three brothers survive as well. They are: April G. and Bill L. Sheller, Leesburg, Indiana: Mike L. and Kathy Doll and David A. and Carmen Doll, all of Plymouth and Richard W. and Carol Feltz, Venice, Florida. Numerous nieces and nephews also survive along with lifelong best friend Kent Mattix and his wife Donna.
He was preceded in death by his birth parents.
Jim’s family invites his friends to celebrate his life and share memories from 2 to 8 p.m. on Tuesday, November 28, 2006, in the Johnson-Danielson Funeral Home, 1100 N. Michigan Street, Plymouth and continue after 7 a.m. Wed. until time of services.
Funeral services for Jim will be held at 11 a.m. on Wednesday, November 29, 2006, in the funeral home.
The Revs. Douglas Smith and Brett Jones will officiate.
Burial will follow in New Oakhill Cemetery where military honors will be accorded him by the United States Air Force.
Memorial gifts in Jim’s memory may be made to the Saint Joseph Regional Medical Center, Center For Hospice & Palliative Care or a charity of the donor’s choice.