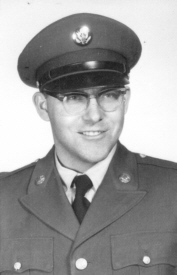 Peter L. “Pete” Weedling, 71, 17020 Tomahawk Trail, a resident at Plymouth for the past 30 years, passed away at his residence after a four year battle with cancer, at 10:44 a.m. on Wednesday, June 26, 2013.
Pete was born in Plymouth, the son of Wayne L. and Edna Mae (Fear) Weedling, on December 8, 1941.
He graduated from Plymouth’s Lincoln High School with the class of 1960 and served in the United States Army during the Vietnam War, stationed in Germany.
He worked in the Merriman’s Grocery Store after high school until he was drafted.
On September 20, 1968, Pete and Mary A. Cardone were married in the Pretty Lake Methodist Church by Rev. White.
He was co-manager with his brothers Dave and Walt of the C&C Oil Co and then Dave and Pete partnered in Weedling’s Place Gas Station on West Jefferson.
Pete retired as a dispatcher from Aker Plastics after 26 years of service in 2004.
One of his favorite pastimes was a good trip to the Casino and spending time with his family. He enjoyed collecting miniature cars from the Franklin Mint.
He also enjoyed caring for his yard and property.
Pete is survived by his loving wife, Mary and Edna, his mother.
Two sons and their families survive as well. They are son, Paul L. (Jen) Weeding, New Whiteland, IN. and grandchildren: Paul, Joseph, Ezeckiel and Samaria and son, Jason A. (Christina) Weedling, Culver and grandchildren: Jacob, Joey, Dominic, Carter and Aleyah.
Two brothers and a sister also survive. They are Walter E. (Pearl) Weedling and David (Patt) Weedling, all of Plymouth and a sister, Mary (Ron) Hite of Argos.
Several nieces and nephews survive as well.
Pete was preceded in death by his father, Wayne, and a sister, Nancy Reichert.
To honor his wishes there will be no services or visitation.
Memorial donations maybe made to the Center for Hospice Care, 112 S. Center St., Plymouth, IN 46563 or the Multiple Myeloma Foundation, 383 Main Avenue, 5th Floor, Norwalk, CT 06851