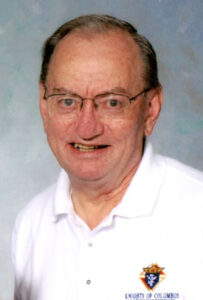 Peter “Pete” Polnaszek, 65, passed away unexpectedly at his residence on Tuesday morning, July 7, 2015.
Peter was born August 14, 1949 in Minneapolis, Minnesota to Joseph and Marcella (Barton) Polnaszek.
Pete and his wife, Corky, moved to Plymouth where he began working for Zentis Food, until his retirement.
Pete was serving as the current Grand Knight for the Knights of Columbus Fr. Tremmel Council #1975 in Plymouth and Indiana State Council- Fourth Degree. He always stayed heavily involved in their activities. His wife and he were also members of St. Michael’s Catholic Church.
Pete is survived by his wife of 43 wonderful years, Corky of Plymouth, and their two sons: Tommy (Christy) Polnaszek of Williamson, GA and Timothy Polnaszek of Nicholson, GA. Also surviving are his seven grandchildren: Bree, Vanessa, Keegan, Aidan, Veronica, Luke and Lily; his mother-in-law, Frances Norbeck, and his dog, Yogi.
His siblings are: Frank, John, Joe and Dan Polnaszek and Margaret Hovey.
Pete was preceded in death by his parents and brother, Tom.
Visitation will be from 5 – 8 p.m. on Thursday July 9, 2015 in the Johnson-Danielson Funeral Home, 1100 N. Michigan Street, Plymouth. A rosary will be recited at 7:30 p.m.
Mass of Christian Burial will be at 11 a.m. on Friday July 10, 2015 in St. Michael’s Catholic Church, 613 N. Center Street, Plymouth, with Fr. John Korczmar C.S.C officiating. Memorial contributions can be made to the Special Olympics 1133 19th Street NW, 12th Floor, Washington, DC 20036‐3604