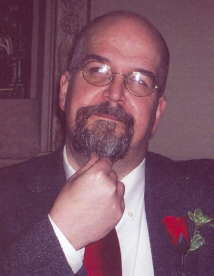 Peter S. “Pete” Moriarty, 45, a Roy St. resident, died unexpectedly of natural causes at his residence on Friday, September 23, 2011. Pete called Plymouth home for most of his life, with some years spent in Chicago, IL and Seattle, WA.
Pete was born in Plymouth on August 8, 1966. Baptized a Roman Catholic, he was the son of Russell L. and Anita B. (Cage) Moriarty.
He completed his elementary education at St. Michael’s, and graduated in 1985 from Plymouth High School where he played sports and was active in band and variety show performances.
Art was a part of Pete’s life from his early childhood when he would trace his older brother Mark’s comic books; as a pre-teen he was illustrating for his father. His abilities and talents were recognized and encouraged even today by his family and art teacher and longtime friend, Larry Holloway.
Pete made friends easily and treasured them for life a testament to that of Pete and grade school friend Kent Jeffirs.
In 1989, he earned a four year degree from the Art Institute of Chicago. He free lanced for Slice of Lime Publishing as an illustrator for their popular college campus “Born to be…” series for: Texas, Oklahoma, Texas A & M, and Louisiana Lafayette.
He also drew for Marvel Comic Books illustrating the “Blue Devil” character.
Pete was a Chicago Cub and Chicago Bear fan. He was a great cook and he enjoyed reading science fiction, debating politics and religion with family and friends.
He is survived by his mother, Anita, of Plymouth and by two brothers, Michael A. (Ellen) Moriarty, of Yorktown, VA; and Mark A. (Lucinda) Moriarty, of South Bend, and a sister, Kathleen A. (Patrick) Kowalski, also of South Bend.
Nephews Ryan P. Moriarty, Jacksonville FL, and Sean M. Moriarty, Yorktown VA, survive as well, together with two aunts, Kate (Trevor) Matthews of France, Carrie Cage of Plymouth, and an uncle Allan (Jayne) Cage of Sarasota Florida and numerous cousins.
He was preceded in death by his father, Russ Moriarty and an uncle Lyndol (Fran) Moriarty, and a cousin, Lori Moriarty.
Memorial services in the funeral home will be at 7:00 p.m. officiated by Pete’s brother-in-law, Rev. Pat Vandenburgh, pastor of My Father’s House, of Lena, IL.
Friends will be welcomed by Pete’s family from 4 to 7 p.m. on Thursday, September 29, 2011, at the Johnson-Danielson Funeral Home, 1100 N. Michigan St., Plymouth, IN.
Memorial gifts in Pete’s memory may be made to Heartland Artists 203 N. Michigan St, Plymouth, IN 46563.