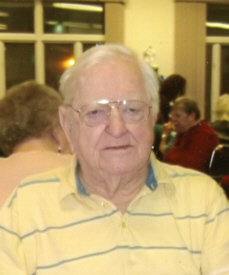 Philip E. Warren, 88, a life time area resident, passed away at 2:25 a.m. on Saturday, march 12, 2016 in Pilgrim Manor Center, with his family at his side. The son of Russell and Gladys (Birk) Warren, Philip was born on October 5, 1927 in Lakeville, Indiana. He attended Lakeville High School.
He married Helen Peterson in Plymouth; she preceded him in death. He then met and married Yvonne “Bonnie” Landrie in Plymouth on June 4, 1966; she preceded him in death on April 9, 2007.
Philip worked as a cabinet maker at Mutschler’s in Nappanee for 33 years.
He enjoyed making cabinets, saw blade sharpening, fishing, hamburgers and milkshakes and simply the company of others. Surviving Philip are three children: James (Sheila) Warren of Rochester, Donna Warren and Bryan (Resa) Warren both of Plymouth, four step-children: Randy Wade, Linda Wilcox, John Wade, all of Plymouth and Roger Wade of Cocoa Beach, Florida, eight grandchildren and eighteen great-grandchildren. Also surviving is Carrie (Harold) Samuels of Bremen and Denese (Rick) DeSloover of Plymouth.
He was preceded in death by his parents and two sisters: Mary Ringer and Naomi Ford.
Visitation will be from 11:00-1:00 PM on Thursday, March 17, 2016 in the Johnson-Danielson funeral Home, 1100 North Michigan Street, Plymouth. Funeral services will be held in the funeral home at 1:00 PM on Thursday with Mark Seago officiating. Burial will be at a later date in the Highland Cemetery, South Bend.
Memorial gifts may be made to Center for Hospice Care, 112 South Center Street, Suite #C, Plymouth, Indiana 46563.