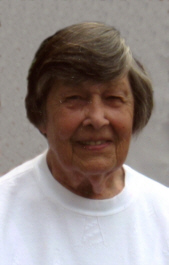 Phylis A. Kralovansky, 90, a longtime Baker Street resident, passed away at 3:30 p.m. on Saturday, February 4, 2017 at the Pilgrim Manor Nursing Home in Plymouth.
Phylis was born in Plymouth on February 18, 1926 to Harold Wayne and Vivian (Stout) Young. With her motherâ€™s passing during childbirth, she was raised by her grandparents in Plymouth. She graduated from Plymouth Lincoln High School with the Class of 1944, and went on to attend Indiana University and graduate with a Master of Business Administration. She remained ever faithful to I.U. sports.
While at I.U. she met a tall handsome basketball player from East Chicago, Indiana and on September 6, 1947 in East Chicago, Phylis became the bride of Andrew Albert â€œAlâ€ Kralovansky. Together they would have four children and share the next 39 years together before his passing on October 7, 1986.
Phylis was an interior decorator for Cook Brothers Furniture in Plymouth and as an accomplished seamstress she spent the last 25 years of her working career alongside her son at Alâ€™s Upholstery in Plymouth. She also enjoyed crafting, sewing and quilting for family and friends. Phylis loved playing golf and tennis and she and Al were longtime Plymouth Athletic Boosters. She held membership in St. Thomas Episcopal Church in Plymouth.
She is survived by her four children and their families: Alan W. (Jeannette) Kralovansky of Sheridan, IN and their daughter Allison, Kurt A. (Susan) Kralovansky of Georgetown, TX and their children; Sonya and Jacob, Jerry (Sally) Kralovansky of Plymouth and children; Nicole, Brittley, Brian, Alyse and Ashley and Sue Ellen Kelver of Tampa Springs, FL and her son Benjamin. Seven great-grandchildren also survive as well as a half-sister Nanalee Childers of Austin, TX and several nieces and nephews.
Phylis was preceded in death by her husband, parents and brother, Arthur Young.
A memorial gathering will be planned at a later date.
Memorial gifts may be given in her name to St. Thomas Episcopal Church, 400 N. Center St., Plymouth, IN 46563