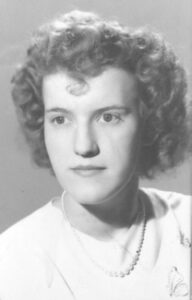 Lifelong resident of Marshall County, Phyllis Darlene Reaker, 83, passed away Sunday, September 9, 2012 of natural causes at 4:15 p.m. in her home located at 13552 6A Road in Plymouth.
She was born October 25, 1928 in Plymouth to Ralph Cleo and Cora Fern (Kanaar) Schaal. She graduated from Plymouth High School in 1947.
After meeting in Marshall Co. Rural Youth, she became the bride of Dale F. Reaker on May 4, 1951 in her parent’s home.
Phyllis worked seven years at the Morris Dime Store in downtown Plymouth. She would later take a job at Harvey Mart, retiring from there after nearly 25 years of dedicated service.
She and Dale are members of the North Salem Church of God, Plymouth.
The couple spent several winters in the Sebring, Florida area. Phyllis enjoyed knitting, reading and watching movies.
She is survived by her husband of 61 years, Dale; three children and four grandchildren, Dennis (Beverly) Reaker of Montgomery, Alabama and their children, Melissia Birge and Amber Cox; Beth (Bert) DeVantier of Independence, Kentucky; and Jim (Michele) Reaker of Cincinnati, Ohio and their sons Tyler and Austin Reaker. Five great-grandchildren also survive.
Two brothers; Donald (Gertrude) Schaal and Gale Schaal all of South Bend, a brother-in-law, Jerry Eby and a sister-in-law, June Schaal, both of Plymouth, survive as well.
Preceding Phyllis in death were her parents, a sister, Linda Eby, a brother, Ralph Schaal and a sister-in-law, Virginia Schaal.
Visitation will be held in the Johnson-Danielson Funeral Home, 1100 N. Michigan St., Plymouth on Wednesday, September 12th from 4 – 8 p.m.
Services will be held in the funeral home on Thursday, September 13th at 10:30 a.m. with Pastor Bob Collier officiating. Burial will follow in the New Oakhill Cemetery, Plymouth.
Memorial gifts may be given to the North Salem Church of God, 13263 4th Road, Plymouth, IN 46563.