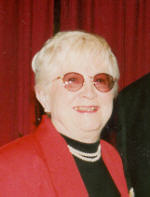 Phyllis Dills-Kunze, 72, of 805 Baker Street, Lot 38, Plymouth, died of a cancer related illness at 3:35 a.m. on Wednesday, April 2, 2003, at Miller’s Merry Manor, Plymouth. Phyllis was a lifelong Marshall County resident.
Born on April 14, 1930, she was the daughter of Virgil M. and Pearl Pease Krouse. She graduated from Argos High School in 1948, and from Beauty College in St. Louis, Mo.
Phyllis was first married in 1953 at Plymouth to Harold R. Dills. Harold died in December of 1977. On June 28, 1997, she and Kenneth E. Kunze were married in Plymouth.
A self-employed hairdresser, Phyllis worked out of her home, Phyllis’ Hair Care, for over 20 years. She was a member of the National Cosmetology Association of Indiana.
A friendly, happy, much loved person, she enjoyed sewing and oil painting. An avid traveler she enjoyed R.V. camping in many states. She dearly loved her grandchildren and working jig saw puzzles with them.
Phyllis is survived by her spouse Ken and by her son and his family, a step-son and two step-daughters.
Her son is Stephen R. and his wife Vicki Dills and their children are: Matthew D., Nicholas S., Morgan Elizabeth, and Adam C. Dills, all of Jasper, Ind.
Step-son James C. and Renate Kunze, and step-daughters, Lora J. and Bryan Renz and Kathryn E. and James Bottorff, all of Plymouth, and numerous step-grand and great-grandchildren survive as well. Two nieces, Mary Anne Roebuck of Stone Lake, Ind. and Gloria Jeanne Gilbert, Plymouth and there families also survive.
Phyllis was preceded in death by her parents, her first husband, a son; Phillip E. Dills who died this past November and a sister, Pauline Elliott.
Friends may call at the Johnson-Danielson Funeral Home, 1100 N. Michigan St., Plymouth, from 4 to 8 p.m. on Friday, April 4, 2003.
Funeral services will be held on Saturday, April 5, 2003, at 10:30 a.m. in the funeral home. The Rev. Drs. David Moffett-Moore and Ronald Liechty, pastor and former pastor, of the First United Church of Christ where Phyllis was a member, will preside at the services.
Burial will be in New Oakhill Cemetery, Plymouth.
Gifts in memory of Phyllis may be made to the church or to a charity of the donor’s choice.