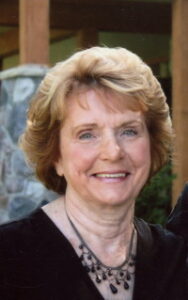 Phyllis Hutton, age 84, of Plymouth, Indiana, passed away Wednesday July 22, 2020. Phyllis was born on November 30, 1935 to Walter and Mildred (Singleton) Luse in Plymouth, Indiana.
On July 15, 1950 she married Robert Caldwell in Crown Point, IN and together had four wonderful children, Jim, Dave, Deb and Jeff. Sadly, Robert passed away on November 28, 1961. Phyllis worked at various jobs while raising and providing for her children, eventually retiring from St. Anthony Hospital in Crown Point. During those years, she also met Frank Hutton, and they married on April 29, 1979. Frank would become “Dad” to her children and Grandpa to her grandchildren. Frank passed away on May 11, 2006. In October 2009, Phyllis married Don Bowser. He would spark her love of travel, as they spent their winters in Ft. Myers, FL, until his passing in January 2013. Phyllis later met Dick Eley, who was her beloved companion throughout her final years. They shared life together and traveled around the country, as she put it, “seeing sights she never thought she’d see.”
Phyllis enjoyed volunteering at the Center for Hospice Care as a receptionist. She was a member of House of the Lord Church as well as Argos United Methodist Church.
Phyllis is survived by her sons: David (Diana) Caldwell of Plymouth, IN and Jeffery Caldwell of Lemoore, CA; brother, Larry (Diane) Luse of LaPorte, IN; son-in-law, Russell White of Plymouth, IN; as well as 13 grandchildren, 41 great grandchildren and 3 great-great grandchildren.
She is preceded in death by her parents; husbands; son, James Caldwell; daughter, Deborah White; sisters, Betty Herr and Connie Luse; brothers, Robert and Ronnie Luse; and granddaughter Rachael Cinnamon.
Visitation will be held on July 29, 2020 from 4-6 p.m. at the Johnson-Danielson Funeral Home, 1100 N Michigan Street, Plymouth. Funeral services will immediately follow with Rev. Charles Krieg officiating.
Burial will follow at the New Oak Hill Cemetery, Plymouth at a later date.
Memorial contributions can be made to the Center for Hospice Care, 112 S Center St C, Plymouth, IN 46563.
PLEASE NOTE: For your protection, the entire funeral home staff will wear masks. It is mandated that family members and their guests do so as well. The funeral home will not provide any masks.