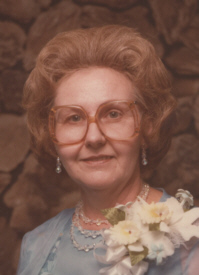 Phyllis J. Bender, 86, formerly of the Schererville area, passed away at 9:06 a.m. on Tuesday, April 15, 2014 at the Golden Living Nursing Home, Merrillville.
Born to Leo and Ilo Marie (Brewer) Sickmiller on April 28, 1927, Phyllis grew up in Plymouth, Indiana. She graduated from Plymouth High School in 1945.
Phyllis married Kenneth LeRoy Bender in Plymouth on October 4, 1947. The couple moved to the St. John/Schererville area, where they would make their home for over 50 years. He would precede her in death on December 4, 1976.
Phyllis worked as a surgical aide at Our Lady of Mercy Hospital in Dyer for 26 years before her retirement in 1988. She was also a member of the Civil Air Force Defense from 1951-1953.
She loved to travel with her friends, visiting all states but Alaska and Hawaii, and went on many cruises. Phyllis loved to decorate her home for every holiday. Halloween was especially a favorite for her and Kenneth, where she enjoyed creating costumes and decorating their lawn. She was an excellent baker and cook, and had beautiful vegetable and fruit gardens.
Phyllis is survived by her son, Larry (Donna) Bender of Valparasio, IN, and two daughters, Gloria Null of Demotte, IN, and Cindy (Jim) Horgash of Crown Point, IN. Phyllis’ grandchildren are Stacy (Dwight) Rumbaugh, Kim (Nick) Null, Amanda Bender, Chris Horgash and Melissa (Scott) Humpfer. Also surviving are her great-grandchildren; Duncan and Annabel Rumbaugh, Hailey Postma, Alexis Horgash, William and Andrew Humpfer and Isabelle DeSieyes.
She was preceded in death by her parents, her brothers; Raymond, Donovan, Wilbur Wayne and Lowell, and her sisters, Nadine and Betty.
Visitation will be from 4 – 7 p.m. EDT on Friday, April 18, 2014 in the Johnson-Danielson Funeral Home, 1100 N. Michigan Street, Plymouth. Funeral services will be held at 11 a.m. EDT on Saturday, April 19, 2014 in the funeral home, officiated by Rev. Charles Krieg. Burial will follow in the New Oakhill Cemetery.
Memorial contributions can be made to the Alzheimer’s and Dementia Services, 922 E. Colfax Ave., South Bend, IN 46617.