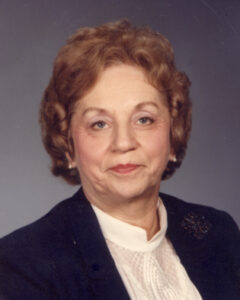 Phyllis J. Smith, 82, of LaPorte, formerly of Plymouth, died in the I.U. Health LaPorte Hospital on Monday, December 5, 2011.
Born in Plymouth on January 28, 1929, Phyllis was the daughter of Glenn and Myrtle Dietl Tillman.
She graduated from Plymouth High School with the class of 1946, and from the International Business College shortly afterward.
She was first married to Robert B. Staner and later to Charles Smith.
She worked as a legal secretary for the Stevens & Travis Law Firm and with the Salem United Methodist Church as a secretary. She also worked in the County Clerk’s office where she married many couples. At one time, she owned an egg route in South Bend and Bremen.
Phyllis loved to travel. She enjoyed collecting antiques and had an extensive array of Fenton glass. She enjoyed yard work, flower gardening, knitting and crocheting.
She was preceded in death by her parents and her husband Charles.
Phyllis is survived by two daughters: Kay and Thomas Toll, LaPorte, Indiana and Diana and Gary Lipply, of Plymouth.
Six grandchildren also survive: Tyler Toll, Maegan (Douglas) Hawkins, Laporte, Indiana, Julia Lipply and Courtney Lipply, of Plymouth and Andrew Lipply of DeMonte, IN. and Whitney (Doug) Kingseed, Sweetser, IN.
Two great- grandchildren survive as well: Adalyn Kingseed and Brenden Stodden.
Friends are invited to meet with Phyllis’ family to share condolences and memories on Thursday, December 8, 2011, from 5 to 8 p.m.
Funeral services for Phyllis will be held at the Shiloh Wesleyan Church, 10542 4B Rd., Plymouth, at 1 p.m. on Friday, December 9, 2011. The Rev. John Perkinson will officiate.
Interment will be in New Oakhill Cemetery.
Memorial gifts in Phyllis’ memory may be made to the Shiloh Wesleyan Church10542 4B Road Plymouth, IN 46563 or the LaPorte Assembly of God 244 East Boyd Blvd. Laporte, IN 46530