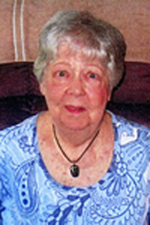 Phyllis M. Nash, 94, life-long resident of Plymouth, passed away Wednesday, August 30, 2017 in the Life Care Center of Rochester.
She was born in Plymouth, Indiana, on August 20, 1923, the daughter of John C. and Hattie H. (Morrow) Xaver.
Phyllis graduated from Lincoln High School in 1941.
On November 11, 1941 in Plymouth, she married Keith J. Nash; he preceded her in death on September 10, 2003.
Phyllis retired in 1984 from American Optical where she was a clerk.
She was a member of the St. Thomas Episcopal Church. She enjoyed flowers, feeding birds and especially loved her grandchildren.
Surviving are her children; Jeanne M. (Byron) White, Linda J. (Al) Myers, Sue Nash and Kevin J. (Ellie) Nash all of Plymouth. Also surviving are fifteen grandchildren, numerous great-grandchildren, one sister; Marilyn Leeney of Aurora, Colorado, two brothers; Michael J. (Laurie) Xaver of Kent, Washington and James F. (Sharon) Xaver of Plymouth.
Phyllis was preceded in death by her parents, husband, daughter; Carol A. Warner, sister; Joan Johnston, brother; John W. Xaver, and a brother-in-law; Robert Leeney.
A Memorial Celebration will be held at 1:00 p.m. on Friday, September 8, 2017 in the Johnson-Danielson Funeral Home, 1100 North Michigan Street, Plymouth, Indiana 46563, with Father Thomas Haynes officiating.
Friends can visit with the family from 11:00 a.m. until time of service on Friday at the funeral home.
Memorial contributions may be directed to either the St. Thomas Episcopal Church, 400 North Center Street, Plymouth, Indiana 46563, St. Michael Catholic Church, 612 N. Walnut Street, Plymouth, Indiana 46563 or Center for Hospice & Palliative Care, 112 South Center Street, Suite C, Plymouth, Indiana 46563.