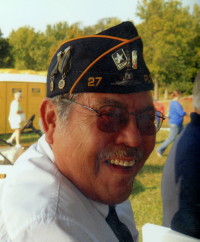 Rafael â€œRalphâ€ Ruiz Jr., 76, passed away at 10:06 p.m. on Saturday, October 27, 2018 with his family by his bedside at the Catherine Kasper Nursing Home in Donaldson.
Ralph was born in Weslaco, Texas on Janaury 31, 1942 to Rafael and Odelia (Reyes) Ruiz Sr. He graduated from Edinburg High School in Texas with the class of 1961. He also attended Pan American University in 1963. He served for our country in the Army National Guard until his Honorable Discharge in 1967.
In June of 1963, Ralph married Mary Alice (Corpus) Ruiz. They moved to Plymouth in 1964, and started a family. The two would remain the best of friends all the way to his final moments.
Ralph worked for Young Door/Jeld-Wen for 45 years until his retirement in 2006.
He was a member of St. Michael Catholic Church, the Moose Lodge, the Elks Lodge, the VFW Post #1162, and he was on various bowling leagues. Ralph was also a member of the American Legion Post #27 in Plymouth, serving on the Honor Guard.
He is survived by the love of his life, Mary Alice Ruiz of Plymouth and their children: Irma Niere (Jim Dunaway) of IL, Irene (John) Kelley of Tyner and Edward Ruiz (Kristie Morgan) of Plymouth, as well as, grandchildren: Kristina Niere, Brooklyn Kelley, Gabriella Ruiz and Aiden Ruiz. Also surviving is his uncle, Rodrigo Reyes and family of Weslaco, TX and cousin, Raynaldo (Lupe) Ruiz and family of OR.
He was preceded in death by his parents and son-in-law, Martin â€œMikeâ€ Niere.
Visitation will be held from 4-7 p.m. on Thursday, November 1, 2018 at the Johnson-Danielson Funeral Home, 1100 N. Michigan Street, Plymouth. A Rosary will be recited at 7 p.m.
Mass of Christian Burial will be held at 11 a.m. on Friday, November 2, 2018 at St. Michael Catholic Church, 611 N. Center Street, Plymouth with Fr. William J. Kummer officiating.
Burial will be in the New Oak Hill Cemetery, Plymouth.
Memorial contributions can be made to St. Michael Catholic Church, 612 N. Walnut Street, Plymouth, IN 46563 or the American Legion Post# 62, 1040 E. Jefferson Street, Plymouth, IN 46563.