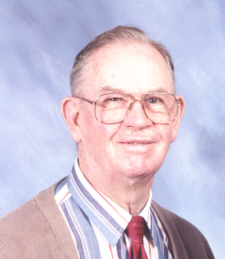 Ralph Robert Ringer, 85, of 12655 Nataka Trail, died at 2:45 a.m. on Thursday, August 20, 2009.
Ralph was born on January 18, 1924 on a farm south of Plymouth to Russel H. and Clara B. Milner Ringer.
He first attended Oakdale School, a one-room school house and later, Inwood for his 7th and eighth years. He graduated from Lincoln High School in 1942 and attended Purdue University for one year.
As a teenager, Ralph enjoyed the opportunity to be a 4-H-er. Ralph started to farm in 1945 and moved on the Henry Lawrence farm in the spring of 1946.
The year before, at a Marshall County Rural Youth Club party, in a string game, he was tied at the wrist of Rose A. Wojcik.
Eleven months later, on February 14, 1946, Ralph and Rose were married.
They were in the dairy business for 20 years, and continued to farm until his retirement.
After his retirement Ralph and Rose traveled extensively, Ralph was proud to say that he traveled to all 50 states.
Ralph served on the Plymouth Community School Board that purchased the land and initiated the construction of the Plymouth High School. For ten years he was also a member of the Marshall County R.E.M.C. Board of Directors.
He was on the Board of Directors of the Marshall County Farm Bureau Membership Co-Op, the Marshall County Plan Commission and the Marshall County Board of Zoning Appeals.
Ralph was a member and served on various boards over the 50 plus years he and his family attended the Trinity United Methodist Church.
Active in the Democratic Party, he was also a longtime Lions Club member and a strong supporter of the eyeglass program.
Ralph is survived by his wife, Rose, and three sons and two daughters. They are: Delores M. Ringer, Lawrence, Kansas: Michael A. (Rox Ann) Ringer, Coldwater, Michigan: Daniel L. (Janice) Ringer, Bremen, Indiana: Larry W.( Cindy) Ringer, Lee’s Summit, Missouri: Carol A. ( James) Renna, Wallingford, Connecticut.
Seven grandchildren survive as well. They are: Tony Ringer, Dustin Ringer, Ashley Ringer, Jason Ringer, Jack Renna, Ben Renna and Olivia Renna.
Ralph is preceded in death by his parents, a son, Leon C. Ringer who died in an automobile accident in 1967, a brother, Kenneth Ringer, and a brother-in-law, Edward Wojcik.
Friends are invited to share memories with Ralph’s family on Saturday, August 22, from 4 to 7 p.m. in the Johnson-Danielson Funeral Home 1100 North Michigan Street Plymouth, Indiana
Funeral services for Ralph will be at 2 pm on Sunday, August 23, with calling one hour prior to services at the Trinity United Methodist Church, 425 S. Michigan St., Plymouth. The Reverends Kerry O’Brien and Paul Nye will officiate.
Memorial contributions may be made in Ralph’s name to the Plymouth Lions Club or the Church Memorial Fund or The Center for Hospice and Palliative Care.