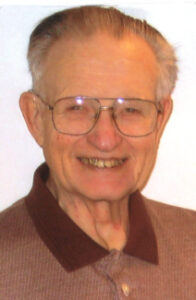 Ray Louis Beyler, 82, of Walkerton, IN., passed away in Miller’s Merry Manor, Walkerton, on Thursday, July 18, 2013, at 6:14 p.m. following an extended illness.
Ray was born in Plymouth, IN. on July 5, 1931, the son of Cecil T. and Wilma Grace (Baker) Beyler, now deceased.
On January 27, 1956, in Mesa, AZ., Ray and his wife, Dolores Mae Bowers, who survives, were married. They have experienced 57 wonderful years together.
He was a union pipefitter having worked out of locals in Arizona and Indiana. Ray retired in 1993 after 16 years as a pipefitter and data configuration manager, for the United States Navy in Long Beach CA.
He graduated from Plymouth High School with the Class of 1950 and attended Marion College. During the Korean War, Ray served his country in the United States Air Force, from 1952 to 1956 and was honorably discharged as an Airman/First Class. Ray was stationed at Williams AFB in Chandler Arizona and it was there he met his wife.
In addition to his wife Dolores “Dodie” Beyler, Ray is survived by three sons and a daughter. They are Mark E. (Rayna) Beyler, North Liberty, IN., Bradley S. (Darla) Beyler, Mesa, AZ. Nathan D. (Angie) Beyler, Walkerton, IN., and Melody R. Beyler, Orange County, CA. Eight grandchildren and four great-grandchildren also survive. His three surviving sisters are; Dorothy (Daren) Morgan of Plymouth, Eileen (Don) Cook of Rochester and Elna DeFur of Noblesville and several nieces and nephews. Ray was a member of the Crossroads Evangelical Free Church in Plymouth.
Visitation will be held on Monday, July 22nd from 5 – 8 p.m. in the Johnson-Danielson Funeral Home, 1100 N. Michigan St., Plymouth.
Funeral services will be held on Tuesday, July 23rd at 11 a.m. in the Crossroads Church, 1650 N. Oak Drive, Plymouth, where visitation will continue one hour prior to the service. The Rev. Scott Yoder, pastor and former pastor Rev. Bill Walder will officiate. Military honors at New Oakhill Cemetery in Plymouth will be provided by the United States Air Force Honor Guard and members of the Plymouth American Legion Post 27, Veterans of Foreign Wars – Marshall County Post 1162 and the D.A.V. Memorial gifts may be made to the Milton Adult Day Services, 922 E. Colfax St., South Bend, IN 46617 for the relief of families with Alzheimer’s patients.