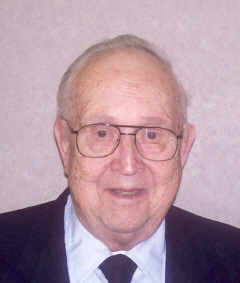 Raymond T. Pierson, 85, formerly of 805 E. Baker St., Plymouth, died peacefully surrounded by his loving wife and family in Pilgrim Manor Nursing Home at 3:40 p.m. on Monday, April 25, 2011.
Raymond was born in South Bend on December 5, 1925 to Louis V. and Victoria Rataczak Pierson.
Ray attended school at St. Adelbert and Central High School in South Bend before joining the Navy. He enlisted in the Navy on January 3, 1943; he served in the Pacific Theater on the USS Mascorna and the USS Vela Gulf and was honorably discharged on April 4, 1946.
He served the City of South Bend with great pride and dedication as a police officer and detective from October 1947 to October 1967.
Ray was employed for 11 years by the Indiana Association of Credit Managers; he then became a courier for the Sisters of St. Francis in South Bend before retiring in 1992.
On September 3, 1983, Raymond and Pauline A. Drake were married.
In April of 1996, Ray and his wife, Pauline, moved to Plymouth, where they became very active with St. Michaels serving as Eucharistic Ministers and also St. Joseph Regional Medical Center as volunteers.
Ray was a member of St. Michael’s Knights of Columbus Council 1975 and the South Bend Cursillo Community.
Ray has made his home at Pilgrim Manor Nursing Facility for the past four years. We would like to thank the facility for their excellent care and support.
Raymond is survived by his wife of 27 years Pauline Pierson, Plymouth, and from his union with Barbara Castleman, a daughter Mary E. LeBold Alvarez, Memphis, Tenn., and a son Patrick L, Pierson of New Bern, N. C. Ray is survived by a brother, Don Pierson, South Bend along with four stepdaughters: Char (Dave) Geisler, Knox, Ind., Carole Drake, Plymouth, Ind and Barbara (Randy) Pipher, of Towanda, Penn. and Jeanne (Todd) Dittrich, Fort Thomas, Kentucky. Two stepsons survive as well: Thomas (Sandi) Drake, Springfield, Mo. and Paul (Theresa) Drake, Rochester, Ind.
There are 24 grandchildren and 16 great- grandchildren surviving, also surviving are several nieces and nephews and a good friend, David Winenger.
Raymond was preceded in death by his parents, and a sister, Loretta Colly and grandson, Paul Drake, Jr.
Visitation will take place on Wednesday, April 27, 2011, from 4 to 8 p.m. in the Johnson-Danielson Funeral Home, 1100 N. Michigan St., Plymouth. The F.O. P. Lodge Ritual will be held at 7:00 p.m., with the praying of the Rosary following the Lodge services.
A Mass of Christian Burial for Raymond will be held on Thursday, April 28, 2011, at 11 a.m. in St. Michael Roman Catholic Church, 610 N. Center St., Plymouth. The Rev. Father William Kummer will officiate.
Military rites will be accorded to Raymond by the Plymouth American Legion, VFW, and DAV.
Memorial gifts in Raymond’s memory may be given to the St. Michael Catholic Church School Fund 612 North Walnut Street Plymouth, Indiana or Center for Hospice Care 112 South Center Street Plymouth, Indiana