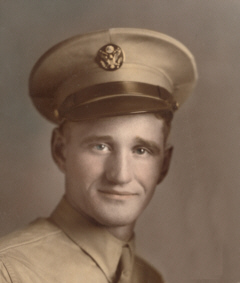 Raymond E. Beck, 90, a Plymouth resident since 1994, coming from LaPorte, died at 10:30 p.m. Sunday, April 17, 2011 at the Carriage Way residence he made with his son and family.
The son of Fred S. and Lela Smith Beck, Ray was born in Dayville, Oregon on February 26, 1921. He later moved with his family to the Chicago suburb of Harvey, Illinois.
On February 23, 1943, Ray and Minnie Ada Madsen were married in Harvey. On the following day, he was shipped out to Europe and there crossed Normandy Beach. His tour of duty in the U. S. Army was from October 2, 1942 until December 18, 1945.
In his youth, Ray was raised on a farm, after his military service, he returned to own a Filling Station in LaPorte. He later went to work for Coca-Cola in LaPorte and then in 1986 he retired from Tucker Freight Line in Michigan City.
A craftsman, he enjoyed home remodeling projects and working with wood. He was also a handyman at his LaPorte church. He loved mowing with his Simplicity tractor, spending time with his son splitting wood and he and his wife traveled extensively, as campers they went from a station wagon to a motor home. Ray is survived by a daughter, Linda (Robert) Easton of Cleveland, TX; two sons: Herbert P. (Katie) Beck of Denver, CO. and Robert K. (Debra) Beck of Plymouth: three granddaughters: Candice Easton of Houston, TX, Emily Beck of Denver, CO, Megan E. Beck of Pittsburg, PA and four grandsons: William Easton of Houston, TX, Matthew Beck and Eric J. Beck, both of Denver, CO and Adam C. (Karina) Beck of Nashville, TN.
Minnie preceded him in death on December 29, 2000.
Visitation will be held on Thursday, April 21, 2011 from 5 – 7 p.m. in the Johnson-Danielson Funeral Home, 1100 N. Michigan St., Plymouth. Funeral services, officiated by the Pastor Matt Elliott, of the Grace Baptist Church will be held immediately following visitation at 7:00 p.m. in the funeral home.
Burial will be in New Oakhill Cemetery, Plymouth.
In lieu of flowers, memorial contributions may be made to Youth for Christ – Indiana Lakes, P.O. Box 1221, Warsaw, Indiana 46581.