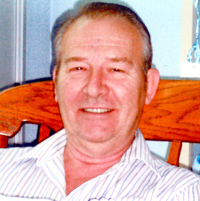 Lifetime Plymouth resident, Raymond E. Harness, 71, passed away in his home with family by his beside at 5:00 a.m. on Monday, September 17, 2018.
Born in Plymouth on May 1, 1947, Ray was the son of Raymond Dwight and Rosella Ann (Vermillion) Harness. He graduated from Culver High School with the class of 1965.
Ray served our country for 6 years in the U.S. Navy during the Vietnam War until his Honorable Discharge in 1972.
In Monterey, Indiana on April 19, 1969, Ray â€œGeneâ€ married the love of his life, Patricia Louella Stewart. To this union came three children; Naomi, Raymond and Wesley, as well as, almost 50 wonderful years of memories, hard times and laughter.
Ray started working for McCord Heat Transfer in 1973 and then for Indiana Heat Transfer Corp. as a supervisor until his retirement in 2009.
He loved doing yardwork and keeping his landscaping up. Living near the lake, he also enjoyed fishing and boating with his family and grandchildren. He also spent lots of his downtime being â€œPapawâ€ and â€œGrandpa Patâ€, and babysitting his grandchildren. Ray was an avid Notre Dame Football fan.
Ray is survived by his wife, Patricia, of Plymouth, and their children: Naomi J. (Matthew) Podlesak of Plymouth, Raymond D. (Angela) Harness of Walkerton and Wesley J. (Jessica) Harness of Plymouth; 9 grandchildren; siblings: Lawrence Harness of Bass Lake, Vivian (Jerry) Grover of Plymouth, Donna Minix of Monterey and Gladys Hamilton of Logansport; and extended family, James Stewart, Carl Stewart, Grace Stewart, Mary Hostetler, Ellen Brown, Betty Whiteman and Betty Stewart.
He was preceded in death by his parents, sister, Sandra Heater, and brother, Terry Harness.
Visitation will be held on Friday, September 21, 2018 from 4-7 p.m. in the Johnson-Danielson Funeral Home, 1100 N. Michigan Street, Plymouth.
Funeral services will be held on Saturday September 22, 2018 at 11 a.m. in the Johnson-Danielson Funeral Home with Pastor Ed Friberg officiating.
Burial will follow in the New Oak Hill Cemetery with Military Honors provided by members of the American Legion Post 27, Veterans of Foreign War- Marshall County Post 1162 and Disabled American Veteran Chapter 42.
Memorial contributions can be made to St. Jude Childrenâ€™s Research Hospital, 262 Danny Thomas Place, Memphis, TN 38105 or Humane Society of Marshall Co, PO Box 22, Plymouth, IN 46563.