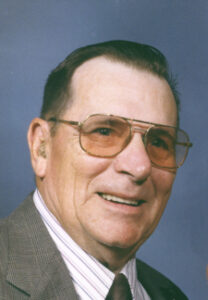 Raymond E. Uhlig, Sr., 76, died peacefully at 7:05 am in his home, 14465 Crest Lane, under the care of Hospice, on Monday, April 10, 2006.
Born in Peru, Indiana, Raymond was the son of Paul and Carrie Berger Uhlig.
He graduated from Peru High School.
Raymond moved to Plymouth in 1951
On November 19, 1976, Raymond and Juanita Yoder were married in Plymouth.
Raymond worked as an area supervisor for the Northern Indiana Public Service Company for 38 years, retiring in 1989.
He was a member of Moose Lodge 741, and enjoyed working in his garden; he was a skilled craftsman, and a very talented bowler. Ray and Juanita along with their grandson, Ray Holycross, traveled extensively. Ray traveled all over the world; he visited every state, except for California, and Oregon.
Raymond is survived by his wife, their three sons, a daughter, a step-son and a step-daughter.
They are: sons, Raymond Uhlig, Jr, Walkerton; and Steve Uhlig, Warsaw, Indiana and Randall Uhlig, of Memphis, Tennessee, and step-son, Robert Yoder of Elkhart. His daughter is Christine Uhlig, Warsaw, Indiana and his step-daughter is Dianne Rudd, Afton, Minnesota, Six grandchildren and five step-grandchildren and 11 great grandchildren also survive his death together with a sister, Emma Uhlig of Peru, Indiana. Raymond was proceeded in death by his parents and a step – daughter, Rhonda Holycross, a brother; Paul Uhlig, Jr., and three sisters, Bertha Yard, Matilda Ammerman, and Dorothy Uhlig.
Friends of Raymond will be welcomed by his family on Wednesday, April 12, 2006, from 3 to 7 p.m. in the Johnson-Danielson Funeral Home, 1110 N. Michigan St., Plymouth.
Funeral services will be held at 10 a.m. on Thursday, April 13, 2006, in the Calvary Evangelical Lutheran Church, where he had been a long-time member. Rev. Steven Resner, pastor of the church, will officiate.
Burial will be in New Oakhill Cemetery, Plymouth.
Memorial gifts in Raymond’s memory may be made to the Calvary Evangelical Lutheran Church, 1314 N. Michigan St., Plymouth or to The Center for Hospice and Palliative Care, Marshall County.