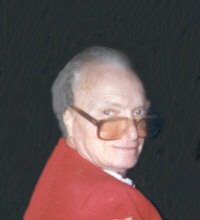 Raymond “Ray” J. Bender, 77, a resident of Country Place Apartments, 1420 W. Madison St., died of natural causes in Pilgrim Manor Nursing Home, at 3:30 a.m. on Friday, September 17, 2004.
Born in Plymouth, Ind., on January 27, 1927, Ray was the son of Charley and Mildred Hagenbush Bender. A member of the Plymouth High School class of 1945, he left school at the age of 17 to go to war. A World War II veteran, he enlisted in the United States Navy on August 3, 1944, and served on the U.S.S. Chicago. He was honorably discharged on October 18, 1947, as a seaman 2nd class.
While attending IUSB after the war, he worked for the Studebaker Corp. in South Bend. He later owned and operated for 19 years the Plymouth Cigar Store, an establishment that included a pool hall and coin dealership.
In 1971, Ray moved to Louisiana and worked for the Shell Oil company as a cook on an offshore oil rig. In 1991, he retired and moved to Las Vegas, Nev., working as a coin dealer.
In 1998, he came back home to Plymouth. In his early years, he enjoyed golf. He was a valued member of the Moose Lodge # 741. The club was a second family to Ray. He was there almost every day, brightening up the premises with his large wardrobe of bright colored sports coats in shades of pink, yellow and green.
He followed the racing ponies, always had a tip sheet folded under his arm and was cheerfully ready to share his expertise with friends.
Ray was also a member of the Plymouth VFW, 1162, and the Argos American Legion.
He is survived by a daughter, April Taviner and her fiancé, Jim Heim, North Liberty, Ind., and a son and daughter-in-law, Jan and Joyce Bender, Denver, Colo.
Four grandchildren survive as well. They are: Deion Bender and Jessica Bender, Colorado; and Dawn and Rich Taviner, LaPorte and George Heim, North Liberty. Two great-grandchildren also survive: Mitchell and Adreanna Taviner, La Porte.
A brother, Clarence Bender, Michigan, also survives.
Ray was preceded in death by his parents and Fern Culp, a sister. Friends may visit with Ray’s family on Wednesday, September 22, 2004, from 10 to 11 a.m. in the New Oakhill Cemetery Chapel, Plymouth, Ind. A memorial service for Ray, officiated by the Rev. Charles Krieg, pastor of the Salem United Methodist Church, will be held following visitation at 11 a.m. in the chapel.
The VFW Post 1162 will provide full military graveside services in the New Oakhill Cemetery, Plymouth.