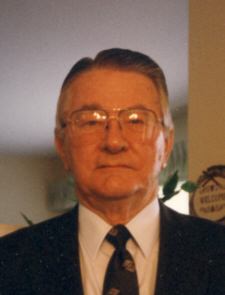 Raymond L. Borggren, 86, died at 3:05 p.m., on Wednesday, Nov. 3, 2010. in our Lady of Peace Hospital, Mishawaka, Indiana.
He was the son of August “Gus” and Selma Marie (Mattern) Borggren.
A graduate of Grovertown High School with the 11-member class of 1942, he played coronet in the high school band.
He worked with his dad on the farm until, deferred once, he was called up to serve his country in World War II.
After training at Camp Wolters, Texas, and Fort Meade, Md., the young man was loaded onto a troop train headed to Boston. The men, members of the 333rd Regiment of the 84th Infantry Division –called Railsplitters—went aboard the Thomas H. Berry, a British transport anchored in Boston Harbor.
Mostly what Ray remembered about the trip over was how seasick he was, all the way. He had some interesting assignments. One was serving at the British camp in Amsterdam.
Tech. Sgt. Ray Borggren was discharged at Camp Atterbury on June 14, 1946. Among his decorations were the Bronze Star and three major campaign ribbons. Ray met Glenna Shafer, a Plymouth High School Graduate in 1946 when he came to look at a new car where she worked at Gates Chevrolet in Plymouth. They were married on June 14, 1952. He is survived by Glenna, his devoted wife of 58 years, their children: Terry and Tammy Borggren, son and daughter-in-law, Plymouth: Kent and Sherri Borggren, son and daughter-in-law, also of Plymouth, Marsha and Jeff Welborn, daughter and son-in-law, Bremen, their grandchildren: Greg Welborn, Shannon Welborn, Jeremy Borggren, Erica Borggren, Tylor Borggren, Heather Borggren and Tina Gratt, great-grandchildren: Paisley Welborn and Vivian Gratt, his sister, Helen Virginia Worman, Grovertown, a sister-in-law, Eleanor Borggren and a cousin, Elaine Hansen.
Ray was preceded in death by his parents: August and Selma Marie Borggren, three triplet brothers: William “Bill” Stewart and Roland Borggren. Also deceased is Selma Borggren, his step-mother.
Ray worked in the insurance business for over thirty years, primarily with Farm Bureau Insurance. He retired in 1990.
He served 10 years as a Marshall County Commissioner, retiring in 1997, was on the Plymouth Community School Board from 1971 to 1974 and was a Republican Precinct committeeman for more years than he could count.
He served on the Marshall County Drainage Board, also the Starke/Pulaski County Drainage Board. He was a member of the Lions Club for over 50 years, holding every office in the local club with the exception of Treasurer, and recently was the recipient of the Melvin Jones Fellow Award.
Ray enjoyed being with his grandchildren. He was an avid golfer and enjoyed working outside and fishing with his family in Minnesota. A lifetime member of the V.F.W. and the American Legion, he was also very active in the Evangelical Covenant Church, Donaldson, where he served in many different capacities.
Ray was proud to be a veteran and loved his country very much. He never missed the opportunity to vote and voice his political opinion.
Visitation with the family and sharing of memories will be from 3 to 7 p.m. on Sunday, November 7, 2010, and one hour prior to the funeral services on Monday, at the Johnson-Danielson Funeral Home, 1100 N. Michigan Street, Plymouth.
Funeral services will be held at 10:30 a.m. on Monday, November 8th in the funeral home. The Rev. Denise Anderson, pastor of the Evangelical Covenant Church, Donaldson, will officiate.
Military Graveside services will be conducted by the Plymouth American Legion, VFW and Disabled American Veterans in the New Oakhill Cemetery.
Memorial gifts in Ray’s memory may be given to the Evangelical Covenant Church, US 30 and Union Road Donaldson, Indiana 46513