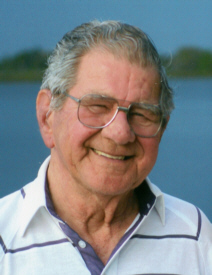 Raymond M. Askins Jr., 88 of Woodbury Drive in Plymouth, passed away with his family near at 5:05 a.m. Friday morning on October 30, 2015 in the Elkhart Hospice House.
Ray was born in Chicago, Illinois on July 13, 1927 to Raymond Sr. and Lena B. (Schaetzle) Askins. His family would move to Bourbon, Indiana in 1937, where Ray would graduate from Bourbon High School with the class of 1945.
Ray served in the U.S. Navy for our country during World War II, and was Honorably Discharged in September of 1946. He then furthered his education, attending the International College and graduating in 1948.
In Atwood, Indiana on January 2, 1949, Ray would take as his loving wife, June A. Wiesjohn. To this union came four children: Robin, Cynthia, Kent and Dawn.
Living in Bourbon most of his life, Ray enjoyed contributing his skills and time to the town. He was owner and president of L&R Products, a truss manufacturing company he prided himself upon and ran until his retirement. He was a former member of the Bourbon United Church of Christ. He served as Bourbon Clerk-Treasurer and he was formerly on the board of the Bourbon Boy Scouts. He was a member of the Bourbon Business Association and a member of the Bourbon American Legion.
Beginning in 1971, June and Ray lived on a farm in Bourbon, which he called his sanctuary. He would spend hours out in the woods, fishing, hunting and being at peace. He also enjoyed bowling, golfing and collecting coins. In 1991, they would move to Plymouth. They became members of the First United Church of Christ and he became a member of the Plymouth Elks Lodge.
Ray was a man with a tough exterior, but inside was the most loving father and husband in the world. He showed his family in many ways his love and compassion, even when words were not expressed. He was always there to “fix it” and make things right. Ray treasured times with his family and memories made with his grandchildren and great-grandchildren.
He is survived by his adoring wife of 66 wonderful years, June of Plymouth, and their children: Robin L. (Diana) Askins of Warsaw, IN, Cynthia A. (Steve) Keller of Scottsdale, AZ, Kent R. (Ginger) of Tucson, AZ and Dawn E. (Don) Crowder of Chesterton, IN. 12 grandchildren, 27 great-grandchildren, a great-great-granddaughter, and his two sisters, Mrs. Betty VerWey of Florida and Mrs. Jean Miller of Bourbon, also survive.
Ray was preceded in death by his parents and great-grandchild.
Visitation will be on Thursday November 5, 2015 from 10 to 11 a.m. EDT in the Johnson-Danielson Funeral Home, 1100 N. Michigan Street, Plymouth, IN 46563. Funeral services will immediately follow in the funeral home at 11 a.m. with Isaac Bules officiating.
Burial will be in the New Oakhill Cemetery with Military Honors provided by members of the Bourbon American Legion Post 424.
Memorial contributions can be made to the Animal Welfare League of Koskciusko County 3489 E 100 S, Warsaw, IN 46580.